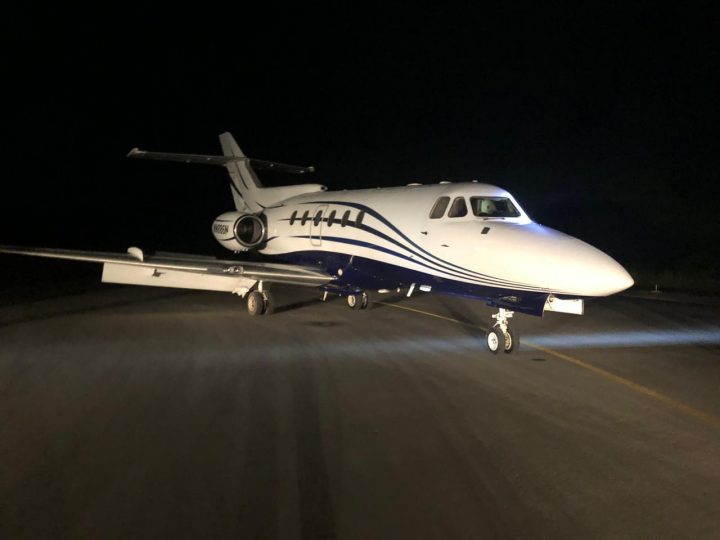 By BBN Staff: Belize’s Ministry of National Security has issued a statement on the drug plane that was busted in Chetumal, Mexico.

According to the Ministry, authorities in northern Belize responded to reports of a low-flying aircraft in the area of San Estevan, Orange Walk District on Friday morning around 2.

Shortly thereafter, security forces were deployed to the scene where the plane would be landing near the El Progreso Road in Corozal.

When authorities arrived at the scene, they found landing lights set up on the road, about a mile long on either side, ready for the plane to land.

According to the statement from the Ministry of National Security, trucks were seen in the vicinity and authorities caught up with a truck that was about to cross the Pueblo Viejo ferry.

The Ministry informs that occupants of the vehicle opened fire at the security forces and the men then forced the ferry operator to take them across the river. The assailants then sped off and when they reached the other side of the river, they crashed the vehicle into a tree.

According to media reports, another truck arrived to pick up the men and then they drove off.

“The swift reaction of Belizean authorities foiled the landing of the narco jet that eventually landed at the Chetumal International Airport in neighboring Mexico. Reports from Mexico indicate that the narco jet was running out of fuel,” the Ministry of National Security notes.

“The security of the international airport of Chetumal was violated, because, in the early hours of Friday, the operators of the drug trade landed a Hawker Beechcraft jet with fake registration, with a shipment that is calculated to be more than one and a half tons of cocaine.

After the unauthorized descent, the crew of two left the aircraft closed with their shipment of narcotics, at the west end of the runway, and ran out into a clearing that is among the vegetation of the airport, jumped the perimeter fence on the north side, and disappeared on the streets of Milenio Y Jardines residential areas bordering the Chetumal International Airport.

According to the data collected, at 3:40 a.m., the Hawker Beechcraft landed at the international airport of Chetumal, and proceeded to the west of the runway, almost in front of the Social Rehabilitation Center (CERESO), near where the planes turn before starting their takeoff.

The aircraft was found around 4:15 hours, so the General Directorate of Civil Aeronautics (DGAC) towed it to the control tower, and was made available to the public prosecutor Federal (MPF) of the Attorney General of the Republic (PGR).

There allegedly was no alert at the Chetumal International Airport on the flight landing and no emergency situation declared.

The jet landed at the Chetumal International Airport as if nothing happened, which draws attention since in the last few days there have been reported presence of aircraft in Quintana Roo territory loaded with drugs, which have appeared near the communities of Payo Obispo, Rio Verde and Miguel Alemán, of the municipality of Bacalar, two totally burned and another burned and dismantled.”

The Ministry of National Security states that the aircraft which had white with blue stripes also had a false registration number, which at a first glance appeared to be NN886N and suggests that it was registered in the United States.

A more detailed observation revealed that the registration number was placed upside down on the fuselage of the plane and that it was really N988NN, which in the aeronautical registers corresponds to a passenger plane Boeing 737-823.

“The criminal use of the aircraft was confirmed hours later in the night, as federal agents and experts carried out the inspection of the aircraft, and inside found a large shipment of cocaine. The counting and weighing of the illegal load were underway until early Saturday, which first estimates being more than a ton and a half of narcotics,” the statement from the Ministry of National Security ends by saying.