The Ultimate Belize Bucket List – An Insider’s Guide to Belize 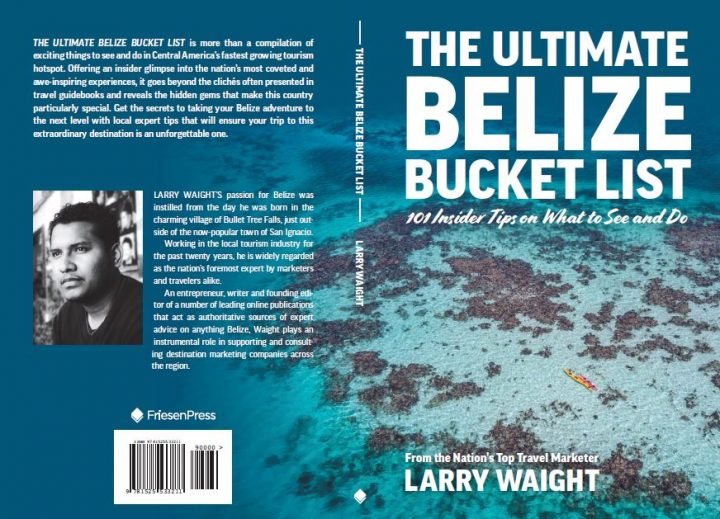 By BBN Staff: Coming in with more than a dozen endorsements from travel experts across Belize, The Ultimate Belize Bucket List, a new book by Larry Waight has just been published to very positive reviews. A well-known figure in the Belize tourism industry, Waight’s debut novel is designed to be an all-in-one guide to his native land. With 101 insider tips on what to see and do, The Ultimate Belize Bucket List is being marketed as a “travel bible” for anyone interested in visiting Belize.

Waight began his long career in tourism when, at age 16, he and his siblings were hired by some foreign visitors to guide them to ancient Maya cities near his hometown of San Ignacio. Waight later parlayed this experience into becoming a travel marketer working for some of the biggest name resorts and hotels in the country.

Riding a wave of increased tourist interest in the country, Waight has emerged to become the unofficial spokesman for the hospitality industry in Belize, so it’s no surprise that his debut book is loaded with glowing endorsements from hotel and resort operators, travel journalists, and Belizean government officials working in the tourism industry.

Speaking to the press, Waight said that he wrote The Ultimate Belize Bucket List out of frustration at the lack of in-depth and timely information about his country. Once a relatively isolated backwater, Belize has only just recently caught the attention of mainstream publishers like National Geographic, Lonely Planet and Fodors. Waight wrote his book as a way to provide a more comprehensive perspective on all of the many tourist attractions in the country.

The Ultimate Belize Bucket List is much more than just a guidebook for tourists, however. Waight also wrote the book with his fellow citizens in mind, wanting to create a resource that would inspire and inform Belizeans about all that their country has to offer. Reading much like an extended love poem to his native land, The Ultimate Belize Bucket List also includes cultural information about the people of Belize as well as covering more than 3,000 years of the country’s history.

The Ultimate Belize Bucket List will be on sale at Amazon and more than 40,000 other book retailers next week.