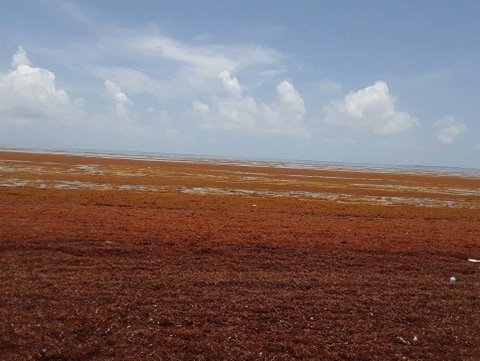 By BBN Staff: The Caribbean Regional Fisheries Mechanism (CRFM), which is based in Belize has started a study to determine the negative effects that sargassum seaweed has had on Belize and the greater Caribbean.

The study, funded by the Japan International Cooperation Agency (JICA), seeks to identify areas that are heavily affected by sargassum accumulation, the amount of sargassum that accumulates in these areas, the frequency of the accumulation and what kind of fish species and debris is found in the sargassum plies that accumulate on beach fronts.

According to the CRFM, the study will also entail “A review of the history and scope of the impacts (both positive and negative) will be conducted and the extent of financial losses quantified,” along with countermeasures taken by the national governments, regional organizations, research institutions, and other development partners and donors. The study will also suggest actions and scope of support that Japan may provide to help the countries address the problem.

The CRFM Secretariat is planning to hold consultations with key national stakeholders in the public and private sector, including interests in fisheries, tourism, and environment, as well as with coastal communities and other related sectors within the next few weeks. The organization will also conduct remote surveys and field missions in select CARICOM member states to provide a broad knowledge-base on exactly how the phenomenon has been affecting the countries.

Sargassum influxes into the Caribbean became a problem in 2011, with the first wave having a massive negative impact on economies in the Caribbean and substantial loss of livelihoods and economic opportunities, primarily in the fisheries and tourism sectors. The CRFM estimates that clean-up could cost the Caribbean at least $120 million in 2018.

Sargassum first showed up in Belize in 2014 and has gotten progressively worse since then. Business owners in Placencia told Breaking Belize news that 2018 was the worst that Belize had ever been hit. Realizing that the problem was affecting the tourism industry and had the potential for greater economic fallout, the Government of Belize stepped in to assist businesses in the four affected areas.

GOB granted businesses 2 percent from the 9 percent hotel tax due, which is a 22.2% reduction on the monthly accommodation tax returns for all coastline properties affected by sargassum, in the four affected destinations of San Pedro, Caye Caulker, Placencia and Hopkins. GOB said that the reduction in the monthly accommodation tax is applicable for four consecutive months namely October, November, December 2018 and January 2019.

GOB also agreed to waive import taxes for any business owner in the affected areas wishing to bring in material or equipment for the removal of sargassum. Business owners could get those exemptions by applying through the BTB. GOB also pledged some $1.5 million for BTB to assist the municipal bodies in San Pedro, Caulker, Placencia, and Hopkins in the containment and control of sargassum.