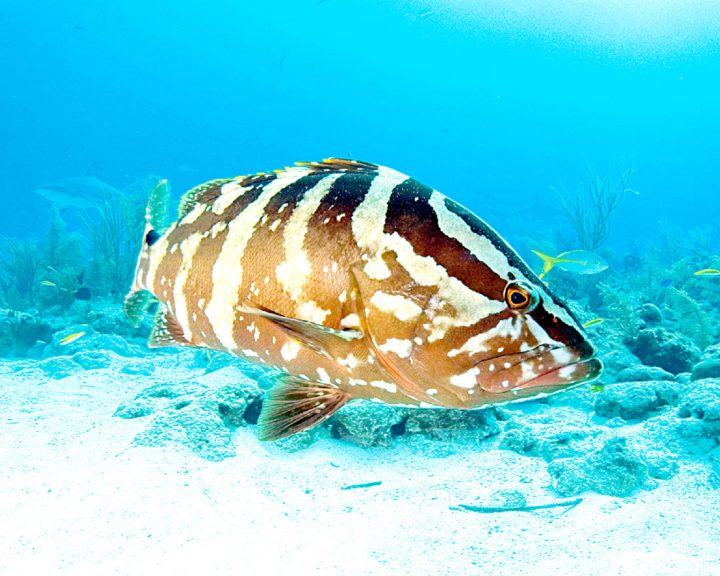 By BBN Staff: Amidst the recent announcement that the Nassau grouper is now a critically-endangered species, the Wildlife Conservation Society (WCS) also shares concerns over suspected illegal fishing of the species at Glover’s Reef.

The occupants of the vessel were seen dumping ice and gear, and cutting free of the boat’s anchor to make a quick escape as the monitoring team approached through the channel. They traveled in a south-easterly direction away from the atoll.

WCS says that it has been monitoring spawning aggregations at Glover’s Reef Atoll for more than a decade, counting and measuring the fish that gather to release their spawn en masse from early evening into the night, from December to March.

For this survey, the overall count was low, with less than 400 Nassau groupers.

Historically, the site would have thousands of spawning groupers.

Illegal fishing is one of the most significant threats to the survival of the Nassau grouper, and management authorities often lack the resources to post enforcement units at these remote locations, on a consistent basis.

The Glover’s Reef Marine Reserve is one of the seven protected areas that make up Belize’s World Heritage Site and one of 13 protected SPAG sites, and has 86,653 acres of its area in conservation status including the SPAG site, where no one can fish, in order to allow marine life to flourish and contribute to areas that are fished.

Visiting professor Dr. Henri Valles from the Cave Hill Campus of the University of the West Indies in Barbados noted that the illegal-fishing encounter illustrates the complexity of marine conservation in the Mesoamerican reef system.

Valles acknowledged that while authorities might succeed at regulating or securing the compliance of Belizean fishers, it would be significantly more difficult to control fleets coming from other countries.

Illegal fishing is a trans-boundary problem that calls for a collaborative approach between neighboring countries.

“Incidences like this truly highlight the need for increased investment in enforcement within our waters, including strategic multinational collaboration in combatting transboundary illegal fishing and trafficking. The immediate enactment of the pending Fisheries Bill is crucial, as it allows for stiffer penalties, and a more rigorous framework for prosecution, supporting the enforcement officers who risk their lives to protect Belize’s territorial integrity and natural resources,” said WCS Country Director, Nicole Auil Gomez.

WCS will host a Press Briefing on Monday, February 4, 2019, to discuss details of this incident.