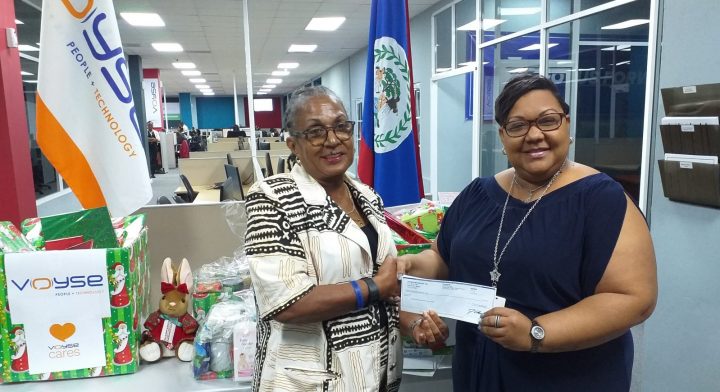 The company handed over the donation as well as boxes of supplies such as toiletries and canned food at its office on Princess Margaret Drive this afternoon. Jelene Bood, brand ambassador for Voyse Int. explained that the donation came through the company’s community “Voyse Cares” program, which focuses on community assistance in the areas of healthcare and education.

Bood explained that donations made through Voyse Cares are done by way of request letters from organizations needing assistance. The managing board of Voyse Cares then reviews those requests to see if they are aligned with the purposes of the initiative and funding is given accordingly.

John Malic, general manager and VP of Loan Processing Operations, said that the company hopes the donation will bring the center closer to achieving its goals in providing for some of the most needy children in Belize.

“This is such a noble organization, providing daily care for our children who are in most need and we are honored to be able to help out in this way,” Malic said.

The company launched its rebranding as Voyse International in September 2018 and launched Voyse Cares simultaneously. The donation is the second under the Voyse Cares initiative, with the first being a

Virginia Eckles, treasurer of the Dorothy Menzies Board of Directors accepted the check on the organization’s behalf.