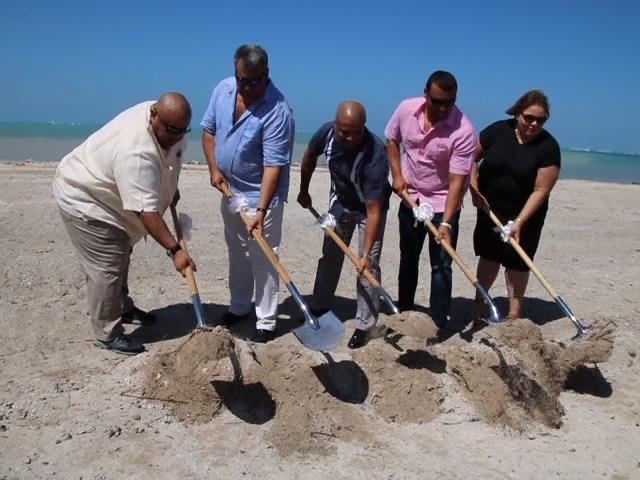 By BBN Staff: The developers of the Stake Bank Cruise Port broke ground on the island yesterday at an official ceremony attended by the developers, ministers, tourism stakeholders and members of the media.

The project will be completed by 2020 and is expected to have a major impact on the number of cruise ship arrivals to Belize city. Belize’s tourism industry has seen consistent growth over the last few years and the new docking facility is expected to further boost the amount of visitors arriving in Belize.

Deputy Prime Minister Patrick Faber, Minister of State in Economic Development, Investment, Trade and Commerce Tracy Panton and Attorney General Mike Peyrefitte attended the event on the government’s behalf expressing GOB’s full support for the project. John Allen, Vice President of EDSA Inc., a company which designs high-end resorts around the world told the media that his team is trying to create a private, pristine and tranquil environment for visitors. He said Belize is a rare destination that has “everything” and he believes the project will be great for Belize.

Stake Bank Chairman, Michael Feinstein, said that he believed in the project from day-one and refused to let it go. The project is expected to be completed in 18-24 months, according to Project Manager Troy Gabb. Mike McFadden, a consultant on the project, told those in attendance at the ceremony that cruise executives are excited about the news of the Stake Bank Cruise Port and are excited for it to be completed as soon as possible.

The cruise port will be able to dock four large cruise vessels and passengers will be able to tender boats from the island to shore for on-land tours and excursions. Feinstein said by the time the project is complete, over $80 million would have been spent on the project.