“GOB doing the best it can with registration for referendum vote,” says PM 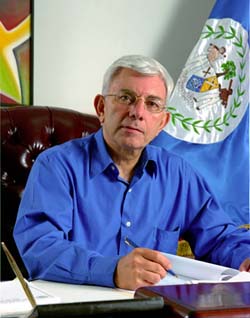 By BBN Staff: Five former prime ministers of the Caribbean Community (CARICOM) countries of Jamaica, Belize, Barbados, and Saint Lucia issued a statement today expressing their concern of the maintenance of the Caribbean as a zone of peace.

The statement was issued jointly by the following former prime ministers:

Lester Bird of Antigua and Barbuda

They express great disquiet about events surrounding the situation in Venezuela and the prospect of any action that is inconsistent with the principles of independence, sovereignty, and territorial integrity.

The former leaders say that they are concerned that no action be taken that would jeopardize these fundamental principles of international law.

“We recall the importance of order in our Hemisphere and the central importance of the United Nations system. The conduct of relations between nations necessitates adherence to, and preservation of, accepted norms and principles and we warn that any retreat from these norms and principles threatens peace and security, and portends far-reaching consequences, including humanitarian suffering and the contagion of economic decline,” the former leaders stated.

The former prime ministers say that they acknowledge that there is a need in Venezuela for humanitarian assistance, however, that assistance should not be politicized but should be conducted under the auspices of the United Nations according to normal procedures, including the participation of the Government and other authorities.

“We categorically reject the use or the threat of force as a means of resolving the situation in Venezuela,” the former leaders note in the statement.

The former leaders join the CARICOM call on all nations to help promote a process of dialogue between all the parties in Venezuela to seek accord and to negotiate constructively a settlement of the internal challenges that confront the nation as a whole.

They also appeal to all governments to contribute to the process of peaceful negotiation by the Venezuelan parties in the interest of the people of Venezuela and the wider Hemisphere.

The leaders also emphasize that none of the Venezuelan parties should be encouraged to eschew the process of dialogue which alone can produce “a Venezuelan Pact” that is central to lasting peace and orderly economic and social restoration and progress.