By Leon Westby: Good sense often struggles to prevail over basic sentiment. This is true because as humans we tend to feel far more potently than we think. Evolutionarily, this has been to our credit. Strong feeling, intuition, helps us recognize and avoid danger much faster than rational thought processes. Compassion and empathy, more than reasoning, sustains relationships and builds social capital. More often than not however, it better serves our interest if intelligence wins out over emotion. The people we elect to govern us, for instance, should be a function of sound judgement – evaluating evidence of their competence to lead and commitment to communal development over personal enrichment. Our reality though is that people significantly vote based on some cultured attachment to a political party. The sentiment is usually of pride and belonging passed down from one generation to the next through parents. Children are taken to rallies, exposed to one-sided political discourse in their living spaces, and generally infused with bias to favour one party over the other. By the time we reach voting age, we instinctively prefer the Standard Bearer who represents “our party” with no real sense of that person’s policy agenda and how it fits into the scheme of our desired future.

Prior to its independence from the United Kingdom, the PUP dominated national politics consistently winning elections. Since its independence in 1981, Belize has had eight general elections – three resulted in a PUP government and five resulted in a UDP government. In the most recent five elections, on average, the PUP captured 50% of votes cast, and the UDP captured 48% while 1% was captured by independent candidates and 1% invalidated. The easy inference is that each party has a steady controlling interest over segments of the voting population. During this same period there were two significant victories in which the popular vote was won by a margin well in excess of the average 10% margin – the first in 1998 where the PUP won by a margin of 20% and the second in 2008 where the UDP won by a margin of 15% of total votes cast. These instances are of high corroborative value – in both elections the outgoing political party suffered the disadvantage of serial scandal relating to maladministration and misgovernment; however, both still managed to retain roughly 40% of votes cast. Those who are sentimental about their political party tend to be so unwaveringly, even in the face of ample evidence that their leaders’ actions and choices are harmful to their personal prospects for prosperity. 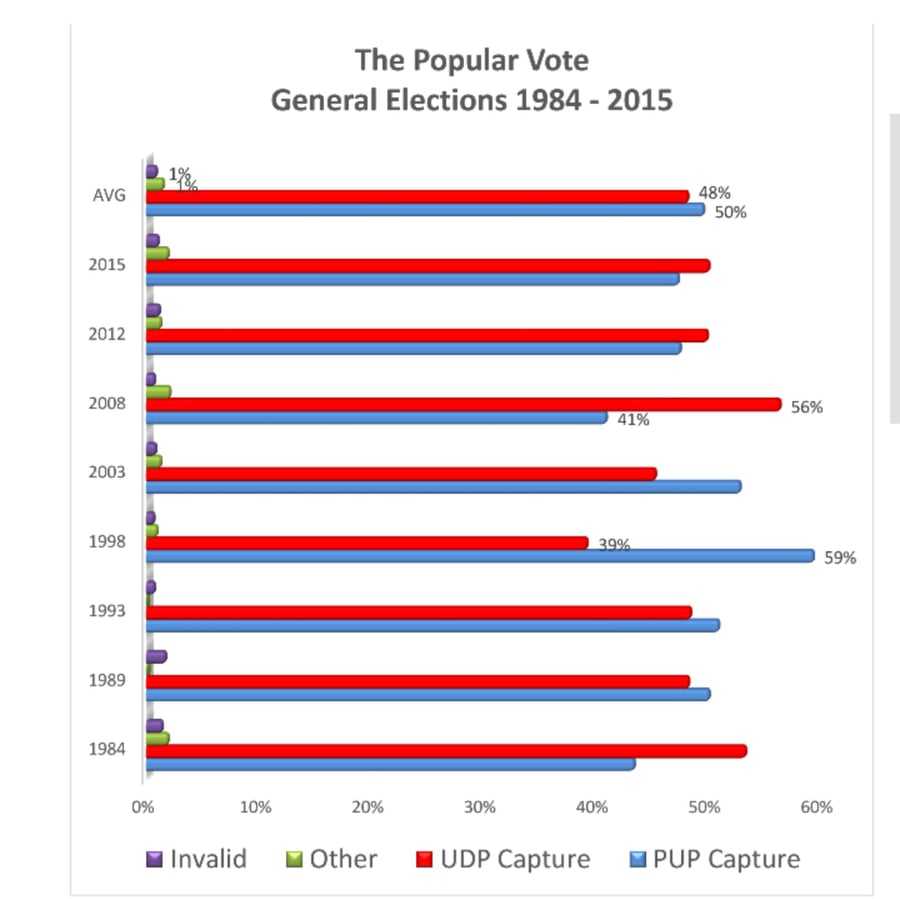 But governments are not formed by popular vote. Currently, the country is divided into 31 constituencies each representing a seat in the House of Representatives. A simple majority of 16 seats for any one party will give them control of government. It is a fair proposition to say that for a party to reasonably classify a constituency as its stronghold it must have secured at least 75% of the total wins since 1981 and the margin of victory must be at least 5% higher than the average margin of victory for any party contesting that area. Otherwise, it can be said that that constituency is only PUP leaning or UDP leaning. The outcome of such an analysis provides a parallel indication as before: both PUP and UDP likely command a roughly even number of voters countrywide who will vote for them based on an emotional attachment more than a rational assessment of their relative strengths and weaknesses, even at the level of the constituency. Now this is no insult to our people – it is human nature to form cohesive social groupings – and not at all uncommon in democratic electoral systems. But it is critical as it signifies, by and large, that a small segment of maybe 15% to 20% of the voting population is properly positioned to influence a change in government. Collectively, this minority represents what people like to call “swing voters”, or perhaps more appropriately termed here, the “thinking vote”. 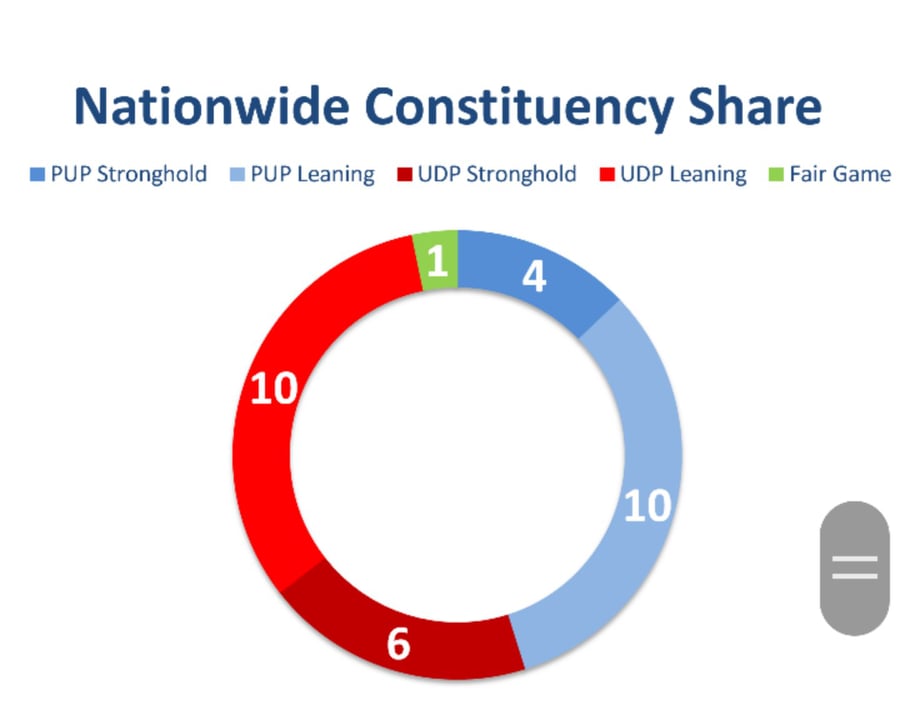 Thinking voters must deprogram their minds from political bias so they can consciously choose the best leaders, even if it means crossing party lines. Some would argue that voting for individuals is pointless: a good leader in a losing party cannot effect change. Following this logic, it makes sense to elect an incompetent representative to help secure seats for a party win. The hope is that the truly able politicians in the party would push the more transformative agendas. This plan suffers two fatal flaws. First, we end up with not enough well-meaning, smart people with policy power to tackle core sectors like health, national security, education, human development and commerce. Second, we concentrate power in the few with real potential expecting them to compensate for the shortcomings of their colleagues and ignoring the fact that absolute power corrupts. Would it not be better to fill the House of Representatives with intellectually able, conscientious and community-oriented political leaders, regardless of party? Thinking voters will answer yes while loyalist will explain, as absolute, the need to concentrate power in one party in support of a clear leadership mandate – a Prime Minister without a majority command of representatives in the House will not be able to get anything done. A premise that sounds far more dictatorial than democratic.

The thinking vote and the strategies employed by the two political parties in getting these votes will likely determine whether UDP remains in government come 2020 or the PUP returns. The PUP however is already at a disadvantage, having shown themselves in the past to rely heavily on the affection of their loyalists – capitalizing on the memory of Rt. Hon George C. Price – with little or nothing more to win elections. This cannot be their approach again leading up to 2020. Nor can the UDP expect the same high returns from sensationalizing the PUP super bond and UHS mishap. We learnt from the last general election in 2015 that the corruption campaign is not enough to disaffect PUP loyalists – even though the UDP took seven more seats than the PUP, the PUP won their seats by an average margin of 571 votes, compared to the UDP’s average 565-vote margin. Perhaps the UDP’s greatest vulnerability in 2020 will be the loss of their intellectual powerhouse, PM Barrow, from the helm of the ship. Certainly, PM Barrow’s gift for clear and convincing rhetoric won over much of the thinking vote to the credit of the UDP and replacing that gift will not be easy. For the PUP, their challenge will be to put together a slate of fresh, genuine candidates that can attract and inspire young, new voters along their social justice platform, particularly in constituencies that they’ve struggled to gain/regain traction (like Belmopan, Queen Square, and Pickstock).

PUP or UDP, the voters’ hope remains that 2020 will see a government better equipped to wage war against poverty and take back our streets from criminality.

Questions or comments on this article? Email me at [email protected]