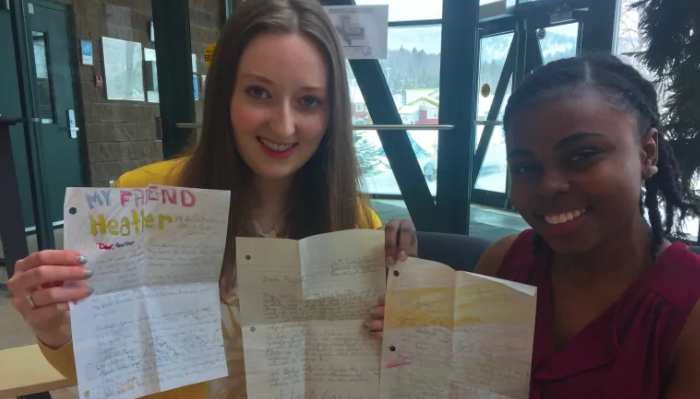 By BBN Staff: Belizeans have made international news for various reasons over the years: some for committing crimes and others for outstanding feats in academic or athletic circles. Recently, CBC News in Canada featured a story on  Melissa Hamilton, a Belizean native who met her old penpal by coincidence in a Canadian University.

Hamilton had exchanged letters with her penpal, Heather Spicer from Mississauga, Ontario, Canada for the last 13 years while they were in grade school. But neither of them had imagined that over a decade later they would cross paths at Memorial University’s Grenfell Campus in Corner Brook, where they are both pursuing master’s degrees in the boreal ecosystems program.
Spicer told CBC News that she recognized Melissa’s name from the volunteer form at the school’s Let’s Talk Science Outreach group, and decided to ask her where she was from. That was when she realized that Melissa had been her penpal for the last 13 years.
Hamilton said that she took the meeting as a sign that she was in the right place at the right time. Since then both friends have reunited and are now cherishing their friendship.