CNN is smitten with Belize

Building for the Future – Paving the Road to Development 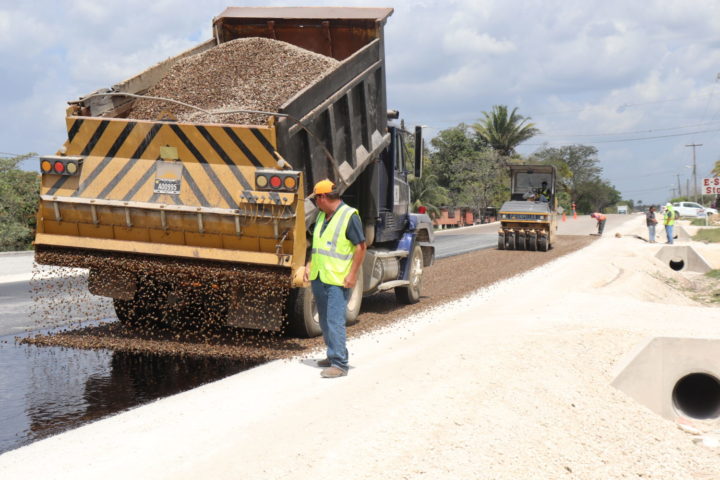 By Delroy Cuthkelvin: The rehabilitation of the George Price Highway from Roaring Creek to Blackman Eddy, which is currently underway, is NOT some cheap, quick-fix kind of project. The road is being upgraded to international standard and built to last.

The project is being executed by Teichroeb and Sons Limited, the same people who paved the Phillip Goldson Highway (formerly Northern Highway) from Sandhill to Orange Walk Town back in the 1980’s, a job which is still holding up more than 30 years later. Also, this project is being done under the supervision of a British based company, IMC Worldwide, whose consultants are always on site conducting regular tests to ensure that standards are being met.

Elaborating on the process of paving and quality assurance mechanisms, Peter Teichroeb of Teichroeb and Sons Limited explained, “First we put a layer of common fill, the sub-base; and then the base. After that has been processed and brought to level, we put on a layer of primer, which is a first coat. Then we apply a layer of three-quarter inch chippings; and we later come back and put a layer of half inch chippings. So, first you have your primer; the primer soaks into your base, which gives it a seal of its own. Then you put your three-quarter chippings, which is a bigger grade; that’s for your wear. Then you put your half inch chippings on top for a smoother ride.”

Teichroeb further explained that on-site testing by the IMC consultants is done every 10 meters for proper compaction, to ensure that the right materials are being used at every stage, and that accurate levels are maintained. “You can’t have uneven surfaces,” he explained. “You can’t have three inches here and five inches there. Everything has to be done to level. So it has to be cut and balanced.”

Explaining why the road is being considerably lifted, he said, “It has almost half a meter of selected materials. That’s because of the heavy traffic that comes on this road, all the containers that go to Spanish Lookout, that go to the border; all the stuff that comes back and forth. That’s one of the reasons that the road is being lifted up a little bit higher, because you need to have good selected material, and a good layer of it.”

When the project is completed, there will also be a number of road safety features, including, bus stops, pedestrian ramps, traffic signs, guard rails, line markings, road studs (cat’s eyes) and other visuals for effective daytime and nighttime driving.

Rehabilitation and paving of this portion of the highway is being executed at a cost of 19 million dollars over a period of 18 months, and the newly resurfaced road should endure for at least 30 years. It’s what we call, “Building for the Future – Paving the Road to Development”.