Two dead in Punta Gorda, one from murder and one from fatal traffic accident

Has BIL served its purpose?

By Aaron Humes:  Belize Infrastructure Limited was formed in 2012 by the Government as its agent to “undertake the design, construction and management of capital projects in Belize,” per UDP organ the Guardian.

Its eight-member board includes two ministers of Government – Rene Montero and Patrick Faber; chief engineer, Lennox Bradley of the Ministry of Works and representatives from the trade unions, business and civil society.

But seven years later, with all of its opening projects complete and in use, there are questions as to the continued need and purpose for an entity that has spent millions since its establishment with no audits presented to the public, even though it is taxpayers’ monies being spent to fund its projects.

This is not to say there have been no audits, as on the BIL website the project documents and contracts and financial details are provided with some accuracy.

The audits by Grant Thornton accounting firm show that BIL’s primary source of income is the Government of Belize, to the tune of between $500 and $600 thousand dollars every year since 2013. In the 2017 report, the additional income of 155 thousand represents “a 24-month contract to provide project and construction management services to the Ministry of Tourism and Civil Aviation in relation to specific development projects within Belize City.” The audit does not detail what these might be.

BIL received $66.64 million in project funds from the Government up to 2017, and has spent $64.67 million in projects from San Pedro to P.G., leaving $2 million in the bank. Notably left out are the Corozal and Orange Walk Districts; O.W. has a multi-purpose sporting complex but the main stadium in Orange Walk Town (the People’s Stadium and Louisiana Football Field) and Corozal Town (Santiago Ricalde Stadium and Andres Campos Civic Center) have not been included in the BIL bounty.

BIL pays some contract taxes, but in the audit it notes that the company otherwise “is exempt from any form of tax or duty levied by the Government of Belize.”

As to the projects themselves, a total of $34.022 million was spent on the Belize Civic Center, more than half the total spent on all projects. The next single largest project was the San Pedro Football Field at $4.6 million, followed by the Benque field at just over $4 million. BIL also claimed consultancy fees for the Chetumal Street-Lake Independence Boulevard project to the tune of $472 thousand. The project initially saved about $1.8 million dollars by reducing the pavement thickness on the road linking the George Price Highway to the new bridge and Belama Phase 1. But very quickly because of the unpredictable clay base, according to BIL General Manager, Christy Mastry, in speaking to several media houses in 2017, “parts of the road began to sink and it will be necessary to re-do the entire road”. Ministry of Works engineering consultant, Avondale Moody, said at the time that his design was ignored in favor of a BIL-produced design.

So far that appears to be BIL’s biggest error, though there have been concerns raised about various of its projects. More interesting is the curious decision to go with private auditing firms for a Government-owned company rather than the Audit Department. It also raises the question of BIL’s future now that all of its projects have been completed.

A select group of entities, such as International Environments Limited, the concern of the Arguelles brothers, Daniel and Carlo, and BCG Limited, have won contracts for design and construction of the sporting facilities.

The Opposition People’s United Party has called on Government to provide the audited accounts of the company and other relevant information but as of this writing have yet to receive it.

See the list of projects claimed by BIL at page 17 of its 2017 audit report and online at www.bil.gov.bz. 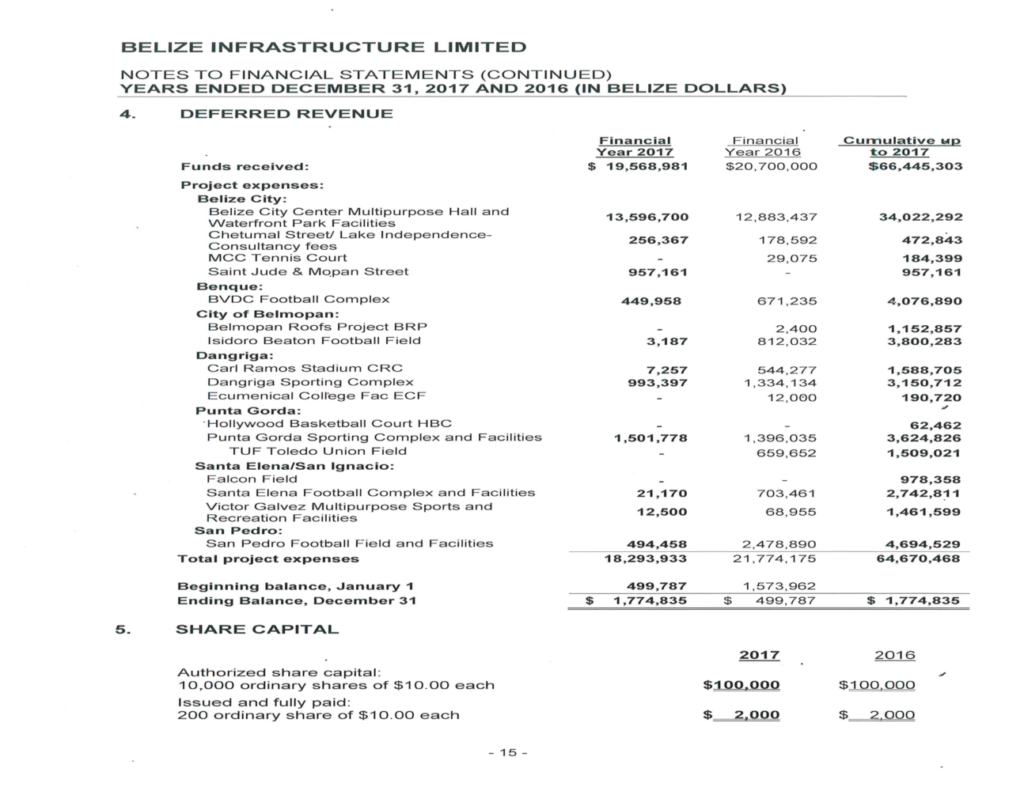