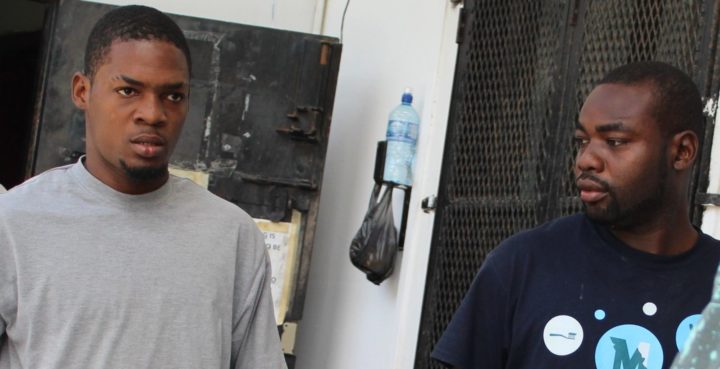 The four men and another unnamed person are accused, on March fourteenth, of attempting to enter the Almond Estate residence of Police Constable Jacinto Roches, and also that of Denise Smith elsewhere in the Sunset Park area. Castillo and Fisher are separately charged with aggravated assault on the officer with a machete and another object respectively and Flowers alone is charged with theft of a pair of black Nike slippers owned by Roches.

Additionally, Fisher and Castillo are separately charged with aggravated assault on Constable Tony Gamboa with machetes.

The court prosecutor objected to bail on the basis of the seriousness of the offences, the general safety of the accused and that it involved police officers.

But the men all told Senior Magistrate Aretha Ford that police beat them up and framed them for the charges.

Flowers said the group had gone out with machetes to hunt iguanas and came upon police officers who told them not to move and began to question them about the burglaries even though they did nothing wrong and told them so. Castillo and Fisher claim they were shot by police in the foot and Castillo further claimed the police charged him with assault so they could justify why they, the police, shot them.

While Senior Magistrate Ford heard the men abuse of police brutality, she also said that the evidence in the facts before the court is strong against them. Police say they have surveillance footage fitting the men description in the attempted break-ins.