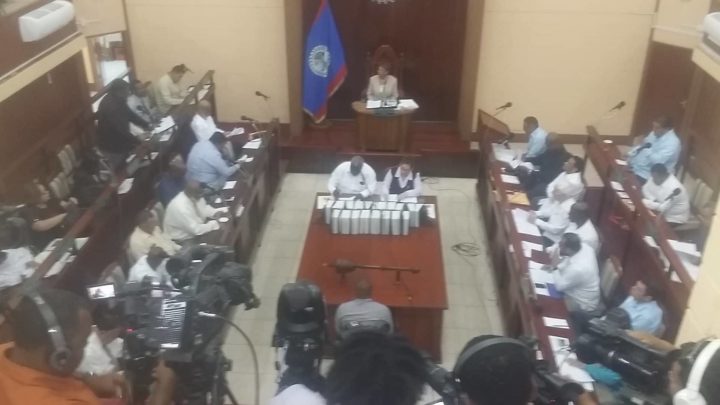 By Aaron Humes:  The headlines will be dominated by two days of debate over the General Revenue and Appropriation Bill, but the House of Representatives will be dealing with additional business starting today.

Three new bills have been introduced and are expected to go through all their stages. The Tax Administration and Procedure Bill intends to establish a Domestic Tax Department, an amalgamation of the Income and General Sales Tax Departments, with responsibility to “facilitate the official and effective administration and collection of domestic taxes; to provide for tax procedures; to provide civil and criminal penalties for violating tax laws;” and other matters.

An amendment to the Customs and Excise Duties Act proposes to implement the fifth and sixth phases of reducing duties in accordance with the Economic Partnership Agreement.

And the Customs Regulation Act is to be amended with regard to providing advance information on passengers and cargo of a conveyance and sharing this information with other states to inform of potential security risks.

The usual Official Charities Fund motion will be adopted along with the eighteenth annual report of Ombudsman Lionel Arzu, who was recently reappointed for another one-year term.

And the Government is asking by motion for permission to pay out 2 million Belize dollars over three years in contributions to the third Multilateral Investment Fund of the Inter-American Development Bank (IDB).

Leader of the Opposition John Briceno will question the Prime Minister about the extent of compensation for land along the George Price Highway, which is being acquired to facilitate widening of the roadway.

And Caribbean Shores area representative Kareem Musa is petitioning for support to adopt his private members’ bill to amend the Representation of the People Act to allow for Belizeans living abroad to vote in the upcoming April 10th referendum on settling the Guatemalan dispute at the International Court of Justice (ICJ).

We’ll have all the action for you from Belmopan as it happens.