No Legal Opinion has EVER Said We would lose at Court

Belize Youth Movement says NO to the ICJ 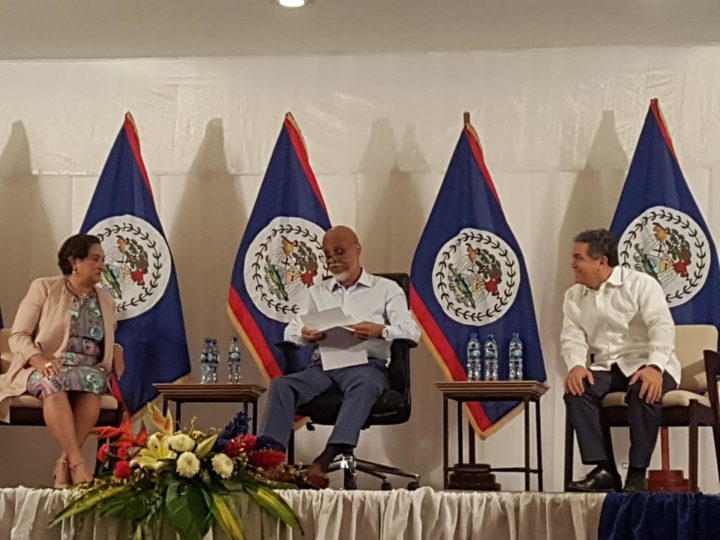 In just under two weeks, on Wednesday April 10th, Belizeans will vote on an issue that is of the greatest national importance since Independence. I simply cannot overstate the significance of the decision whether or not to go to the ICJ to end forever Guatemala’s claim to Belizean territory.  That, of course, is the context in which we are holding today’s press conference.

The Referendum Unit, headed by Ambassador Alexis Rosado, has been making a superhuman effort to bring all the facts to as many people as possible. Apart from plentiful billboards and copious tv and social media ads, the staffers of the Unit have been crisscrossing this country, trying to reach everyone in every nook and cranny of our national terrain. And their tireless campaign, their indefatigable effort to educate every individual encountered in even the farthest reaches, will continue and intensify over these last remaining days.

Of course, the Unit’s mission has been to impart the hard knowledge and disseminate the accurate information necessary to assist Belizeans in making up their minds. But, by now, the nation knows I firmly believe that the facts, every single piece of relevant current and historical data, compel only one conclusion: that this land, every inch of it contained in our borders long since sanctified by the unalterable and unsinkable 1859 treaty, is imperishably, immovably ours. I am further convinced that it is impossible for the ICJ to do other than confirm and make judicially binding that complete and hermetically sealed Belizean ownership that the renowned international lawyers have held to be unassailable.

But, doubts and fears among some of our people still exist. And it is my Administration’s job-and the duty of all of us that know the indefeasibility of the case for yes-to seek to still those doubts and allay those fears.

And that is why we have come before you this morning.

I believe it is admitted by almost all of us that the seminal Lauterpacht, Schwebel, Rosenne, Orrego-Vicuña Opinion of 2001 does in effect describe Belize’s position as impregnable. The question has been asked, though, whether that opinion, unquestionably authoritative when it was written, is still as valid now, 18 years after, as it was then. And, those who are apprehensive say, the international law principles and circumstances on which the opinion was based may have changed, evolved possibly to Belize’s detriment.

Well, GOB on behalf of Belize has put just this question squarely to the venerable and most learned Judge Stephen Schwebel. Judge Schwebel, I remind you, was a longstanding judge of the ICJ, altogether from 1981 to 2000. During that time he was Vice-President of the Court from 1994 to 1997, and ended his tenure by serving as the Court’s President from 1997 to 2000. It is impossible, I believe, to find any living former judge of the ICJ with greater pedigree than Judge Schwebel.

Judge Schwebel has now submitted his answer to the question we asked, and it is that opinion that we publicly disclose today. We publish it in both full and summary form. A little later Ambassador Lisa Shoman will read verbatim portions of the opinion. But for my purposes l wish to highlight just a few of the summary conclusions.

First of all Judge Schwebel roundly and unambiguously declares his position that the Lauterpacht Opinion is as valid and dispositive today as it was in 2001. In other words, our case remains unassailable. And if anything, the consolidation over time of the international law and self-determination principles that originally informed the Opinion, have served only to put an even greater stamp of approval on it.

Judge Schwebel also refutes the argument of some No campaigners that the Special Agreement would allow the ICJ to draw boundaries different from the 1859 boundaries. It is those 1859 boundaries, Judge Schwebel asseverates, that will be binding on the Court. He assures as well that Belize did not give up any rights when it passed the Maritime Areas Act, and that the Act does not in any way hurt Belize’s case. And he is just as firm in saying that Guatemala’s behavior regarding the Sarstoon cannot legally prejudice our rights and ownership of the part of the Sarstoon River north of the Southern boundary line defined in the 1859 Treaty. He ends in clarion fashion: Belize has good title to all its territory including the islands and islets off shore, and the claim by the Republic of Guatemala is without merit and would be regarded as such by the International Court of Justice.

Now all this is a most important and reassuring reaffirmation of the 2001 Legal Opinion. What is completely new, though, is Judge Schwebel’s additional certification of the fact that Belize would be entitled to obtain interim relief from the ICJ if we vote Yes in the Referendum. Judge Schwebel says, and I quote, “…it would be open to Belize to apply to the Court for its issuance of provisional measures to direct Guatemala to cease and desist from its actions on the Sarstoon and …..respect the terms of the 1859 Treaty and Guatemala’s own acceptance of the Sarstoon boundary by word and deed for some 150 years….”

That, Ladies and Gentlemen, is a huge new plus.

I will leave further exposition of the Schwebel Opinion to Lisa and Alexis.  But before I close I want to add just this. This decision whether to go to the ICJ should not put Belizeans against each other. Respect will always be due to those that ultimately vote against. But all else has failed and if we do not go to Court now there really are no other options. It is pointless to talk about revival of negotiations.

That is a route utterly exhausted after scores of years of futile effort; and to try to resuscitate it would only be an exercise in further sterility. The other suggestion of freezing the situation, simply attempting to ignore for fifty years this perpetual Damocles sword, is even more chilling. The Guatemalan incursions are not static; the horrific deforestation and plunder of our natural resources in the Chiquibul will increase; and the nightmare possibility of militarization of the claim would continue to haunt us. But we can put a halt to all of that with fully demarcated boundaries and the UN Security Council as enforcer of the ICJ decision confirming our singular, clear title.

Finally, in urging your Yes vote, I ask you to attach weight to the fact that all three living Prime Ministers of this country are certain that we should go to the ICJ. Each analysed his conscience, the facts, the law and Belize’s interests. And each is sure that Belize must prevail. Of even greater weight is this. National Hero and Father of the Nation George Price was just as certain before he died.  Assad Shoman handed me a piece of evidence that he copied from the National Archives in England. It is the British note of a conversation in 1983 between then Minister Said Musa and the UK’s High Commissioner in Belmopan. Acting on the instructions of then Prime Minister Price, Said told the British of the Belize Government’s view that it was perhaps time to recognize that negotiations were useless and that we needed to consider going to the ICJ. And Right Honorable Musa himself confirms that later when the PUP first initiated the actual process of possible submission of the matter to the ICJ, Leader Emeritus Price concurred. And so Mr Price thereafter fully endorsed the 2007 decision of Belize to accept the recommendation of the OAS Secretary-General to put, if the people agreed in a Referendum, the dispute to the ICJ for full and final resolution.

It is now my fervent hope that we will actualize this position taken by all our Prime Ministers, and vote Yes on April 10.

If we do, it is to get the ICJ to reiterate and judicially seal what the 1859 treaty; the British occupation and administration; and our own sovereign succession, possession and right to self-determination all long since established: this land now and forever, whole and intact in all its splendid integrity, belongs solely and completely to Belizeans.