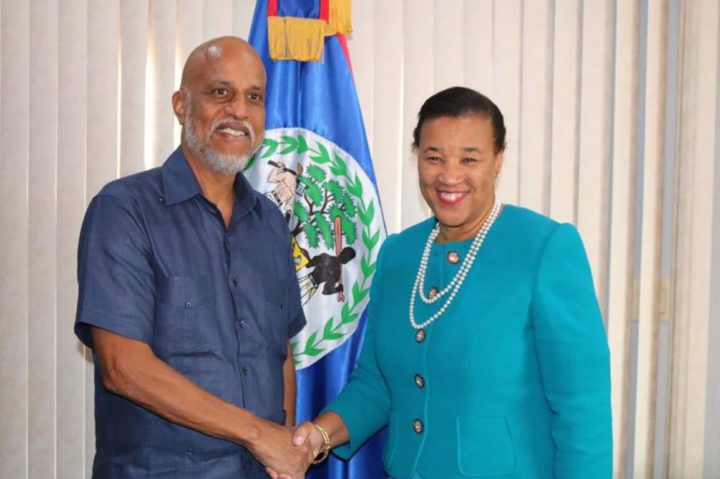 By Richard Harrison: The Efficient Breach Theory endorses the immoral behaviour of breaching a promise whenever the consequences of breach are considered to be superior (in the sense that they are more efficient or better) to those of performance.

Belize seems to have signed a contract with Guatemala, the Special Agreement of 2008 and its revisions, where it agrees that a referendum would be held in both countries for the people to decide if the territorial, maritime and insular legal claims of Guatemala, over any and all of Belize, be submitted to the International Court of Justice for final resolution, accepting the ICJ judgment as final and without appeal option.

Belize and Guatemala both went along with the OAS recommendation, and many allies have invested much time, effort and resources to assist us along this agreed process.

Belize is in this mess because its diplomats either got hoodwinked, or suffer from poor English reading comprehension.

The principal reason why we are at this juncture is because of wrongful interpretation of Article 5 of UN General Assembly Resolution 35/20, which reads:

“Urges the Government of the United Kingdom, acting in close consultation with the Government of Belize, and the Government of Guatemala to continue their efforts to reach agreement without prejudice to the exercise by the people of Belize of their inalienable rights and in furtherance of the peace and stability of the region and, in this connexion, to consult as appropriate with other specially interested States in the region”

“Calls upon the Government of the United Kingdom, as the responsible administering Power, to continue to ensure the security and territorial integrity of Belize”

General Assembly Resolution 35/20 is very special, and powerful, because it received unanimous support from all members, and no member opposed it….not even Guatemala….so that Belize became a state of its own…the 136th member of the United Nations.

Now if you examine Article 5, any student of English reading comprehension will know that Belize has no obligation to engage in any discussion, negotiations or agreement that would seek to “prejudice the exercise by the people of Belize of their inalienable rights….”. Article 1 of the resolution reads, “Reaffirms the inalienable right of the people of Belize to self-determination, independence and territorial integrity, and urges all States to render all practical assistance necessary for the secure and early exercise of that right”

The countries of the world knew about the risks associated with Article 7 of the 1859 Treaty (every legal opinion on the case have expressed concern over this sticking point) and left the door open for Guatemala and UK to reach agreement, acting in close consultation with Government of Belize….not for Belize to engage in direct negotiations with Guatemala based on purported settlement of dispute related to their age-old claim which the world banished with Declaration 35/20.

If the people of Belize participate in such a referendum they will be giving legitimacy to Guatemala’s unfounded claim and will be colluding in the reversal of all the gains of Resolution 35/20.

Thus this referendum must not be held and the people of Belize should not participate in any such referendum that seeks to “prejudice the inalienable rights of Belize”.

But Belize has signed a Compromis….legally binding itself by contract to the process of adjudication through the International Court of Justice.

Now….Belize needs to get out of this legal bind….and the most honourable way is by a People’s Moral Objection.

The basis of Moral Objection are:

(2) the people of Belize are being bullied by their own government, spending many millions of local and international unaccounted-for money, to get a “yes” vote

(4) Belize has a lot more issues that are more important to deal with; like corruption, poverty, crime, low level of competitiveness and productivity, etc.

Since “the consequence of breach must be superior to those of performance” of the Special Agreement contract….we must put something on the table that would be more valuable than following the ICJ litigation process.

Note that Litigation Risk exist in any court and the judgments of courts are generally win-lose outcomes. Thus, proposals with win-win outcomes can thus be deemed to be superior.

It is in this spirit that we should invite the negotiation of a Treaty of Peace, Amity, Commerce, Navigation and Recognition….which is the same instrument used between Spain and Guatemala to SAVE FACE and resolve the Recognition problem 42 years after Guatemala unilaterally declared its independence from Spain in 1821, but which Spain did not recognized until 1863.

Belize should declare its objective to be “a perpetual voluntary peace with Guatemala based on development of respect and trust”…and seek to convince Guatemala, our mutual friends, and the world community to this objective….which everyone knows cannot be arrived at being forced to go to court or via military action.

This Treaty must involve Belize/Guatemala/SICA/Caricom/UK…and may consider input from Friends of Belize/Guatemala. Win-win scenarios need to be designed for each party that contributes to this peace seeking objective. All of these parties have been investing over the years and have repeatedly stated that they each see benefit for their country and the region from the settlement of any remaining dispute.

The trade and investment gaps for all these parties are very wide indeed, thus it must not be that difficult to construct win-win economic scenarios for all the parties. Article 5 of Resolution 35/20 clearly suggests the involvement of the interests of the peace and prosperity of the region in settlement of any remaining dispute.

The UK, for example, exports US$410 million to SICA and imports US$868 million from them, for a total trade of US$1.28 billion. SICA has a population of 59 million and annual GDP of US$334 billion.

For comparison, UK trade with Caricom totalled US$3.25 billion, which is a much smaller group of population 18.3 million with annual GDP of US$78.3 billion.

It will not be very difficult to construct win-win scenarios all around.

This treaty starts off with commitment by all parties to PEACE, with parties free from threat and aggression.

It goes on to develop AMITY, expressed in optimal cooperation, coordination, cohesion, collaboration and even collusion among parties.

Then through COMMERCE, it opens up opportunity for increased trade and investment among the parties, negotiating Most Favoured Nation status and other advantages for the parties.

Allowing through NAVIGATION rules the movement of commerce and leisure with minimal security and phytosanitary clearance, and according to the domestic laws of each country.

It ends with the RECOGNITION of Belize by all parties as an independent, sovereign state with full territorial integrity based on the 1859 Treaty, the UN Resolution 35/20 and its resultant Constitution of Belize.

The people of Belize should set up a system whereby all Belizeans can be invited to register their MORAL OBJECTION to the bullying of Belizeans to participate in a referendum that seeks to prejudice the independence, sovereignty and territorial integrity of Belize. This register of the SELF-DETERMINATION of the people of Belize can be used by any Government of Belize to formally breach the Special Agreement in the most respectful manner to Guatemala, our mutual Friends and the international community that supports our efforts to live as peaceful and prosperous neighbours.