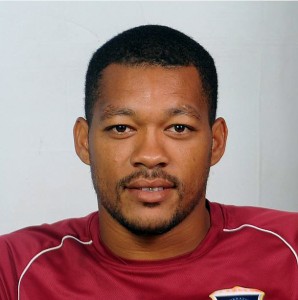 By Aaron Humes: A tight and physical matchup in game 2 of the National Elite Basketball League (NEBL) playoff semifinals threatened several times to get out of control at the Belize Civic Center on Friday night.

After Brian White of Smart Belize Hurricanes was injured on court in the first quarter of play, his brother and national football team player, Ian Gaynair, along with another fan apparently came onto the Civic court, accosting chief of the referee crew,  Melvin Pinelo, and assaulting him.

It is not yet clear whether the Football Federation of Belize or Gaynair’s Premier League of Belize team, the Belmopan Bandits, will issue disciplinary action for his role.

In a similar instance in the National Basketball Association (NBA) in 2004 when a player brawl on court between the Indiana Pacers and Detroit Pistons led to fans throwing liquid at players on court and fights in the stands and on court, the league suspended 10 players for over 100 games between them, including one for the remainder of the league season, and police brought charges against both players and fans.

According to NEBL Commissioner, Karim Juan, Pinelo requested police assistance to escort fans out of the arena but they did not cooperate. He then chose to walk off, forcing a long delay.

An official statement from the League apologizes for the delay and the “sideshows that somewhat robbed from the high-intensity finish that eventually transpired.”

Pinelo is Belize’s only Federation of International Basketball Associations (FIBA)-certified referee and the League said that based on his assessment of the situation and personal safety it would not be right to overrule his decision.

The League also noted that while Mirage-Smart Belize Hurricanes management secured double the number of police officers required for security at a playoff game as compared to a regular season game, their deployment also contributed to the issues experienced.

White and another injured player, Lisaney Lambey, were rushed to the hospital to be treated and the League made note that teams are responsible for their medical needs. However, it will consult with managers on plans to have first responders on standby at every game when needed as of next season.

The League also addressed the final 9.3 seconds of the game, starting with what turned out to be Leroy Louriano’s game-winning three-pointer for Verdes. After the shot, the Hurricanes called timeout, but the referees failed to hear the buzzer and play resumed. A traveling violation was called against Hurricanes and at this time the referees were informed of the timeout call. They awarded the timeout and checked the instant review system to set the correct time, with possession to Hurricanes on a throw-in. The League said it took responsibility for not informing the public address announcer and game commentators on TNC Channel 10 of what was happening.

In his commentary of the game published on Facebook this morning, long-time basketball enthusiast Glenn Tillett suggested that a fourth alternate referee be placed at the desk and that referees get on the same page while officiating a game. Fans, he said, must know their place and not allow their emotions to get the better of them, and he said arena and team managements must make proper security arrangements before, during and after games.