You can vote with and without ID 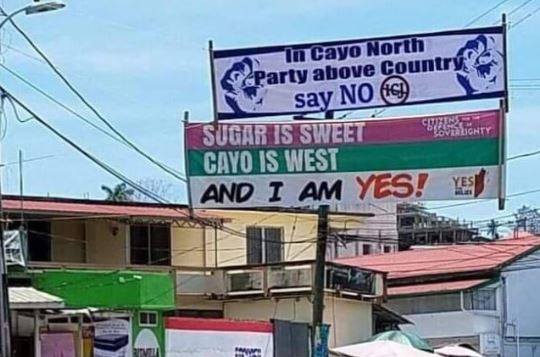 By BBN Staff: The People’s United Party (PUP) issued a statement today strongly condemning the ‘mischievous act’ by certain individuals in the Cayo North constituency to try and mislead voters by printing and erecting a blue and white street banner with the words “In Cayo North, Party Above Country, Say No to the ICJ”.

Pictures of the controversial banner has been circulating on social media.

In a statement issued earlier by the PUP Cayo North Committee, Standard Bearer Michel Chebat and his Executive Committee stated that they reject and denounce this action.

Chebat calls on the individuals responsible to  refrain from trying to mislead voters and instead educate them properly.

“With less than 24 hours before the Referendum,  these desperate individuals are hell bent on using shameful tactics in trying to mislead and deceive the Belizean people towards a ‘YES’ vote,” the PUP said.

The PUP reminds all Belizeans that this is not about party and personality but about the country.