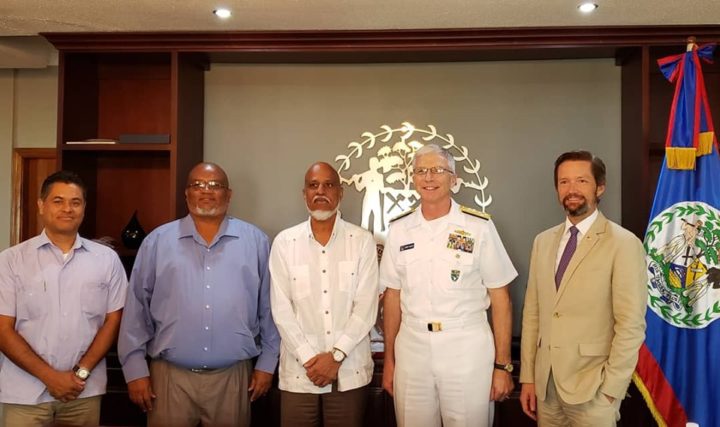 Barrow in his remarks congratulated Admiral Faller on his recent appointment as Commander SOUTHCOM and extended his sincere gratitude for the continued support that Belize receives from the U.S. SOUTHCOM and the great partnership that both countries share.

Barrow and Admiral Faller also discussed areas of concern including the Belize-Guatemala relations and regional efforts to counter narco-trafficking and other illicit transnational criminal activities.

Admiral Faller congratulated Barrow for the impressive execution of the recent referendum and extended his commitment to continue to strengthen the cooperative relationship that SOUTHCOM enjoys with the Belizean Armed Forces.

He also expressed his extreme satisfaction with the professionalism and sincere commitment of the Commanders and men and women of the Belizean Armed Forces.

Admiral Faller was in Belize from May 8-10, his first visit to Belize since taking over as Commander SOUTHCOM.

Admiral Faller and his team visited the Ministry of National Security, the Belize Defence Force, the Belize Coast Guard, and the Joint Intelligence Operation Center (JIOC).

He also visited the Belize Youth Challenge Programme which is a joint effort of the Ministry of National Security and the Ministry of Human Development Social Transformation and Poverty Alleviation.

During his visit, Admiral Faller and his team were hosted by the United States Embassy through its Military Liaison Office and were accompanied by Charge d’ Affairs Keith Gilges and Lt. Colonel Singleton, Defence Attaché to Belize.