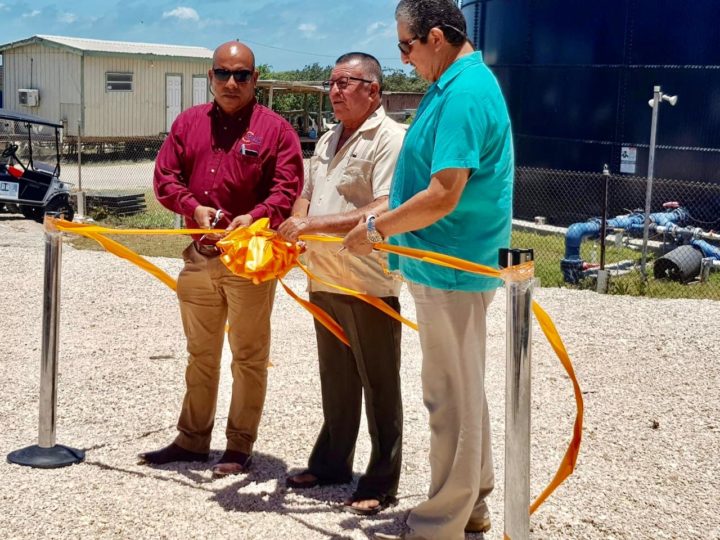 By Aaron Humes: Since its acquisition of Consolidated Water Belize Limited in February, Belize Water Services Limited (BWS) has set about fulfilling the needs of one of its largest customer bases countrywide.

On Wednesday, it formally opened a water improvement project for the island of Ambergris Caye, the tourism capital of Belize, and its chief settlement of San Pedro Town. It is to date the single largest investment in any of its service areas across Belize in 18 years in existence.

The “historic” $35 million investment, says BWS Chairman Alberto August, promises “residents of Ambergris Caye … [that the era of] challenges with water supply is becoming and will very soon become a thing of the past.” The Government of Belize as majority shareholder of BWS is underwriting the project with the Caribbean Development Bank.

BWS paid $14 million for the assets of Consolidated Water, a subsidiary of a Cayman Islands company, through a loan from the CDB.

The state-owned water company is splashing lots of cash: $8.25 million for works throughout San Pedro Town and into the poorer subdivisions of San Mateo and Boca del Rio; $7 million for a reverse osmosis plant to arrive between July and August this year; $6 million for a million-gallon storage tank which will almost double storage capacity on the island.

The end result is to keep up with the growth and expansion on the island and relieve the pressure of water rationing and low or no pressure, now at almost 800 thousand gallons per day.

August said BWS, formerly owned by Cascal, no longer has to repatriate funds after agreeing to repatriate $12 million in funds as part of the buyout of Consolidated Belize.

Town Mayor Daniel Guerrero and area rep and Tourism Minister Manuel Heredia, Jr., expressed their gratitude to BWS for quickly attending to the needs of a municipality which has almost doubled in growth over the last 20 years.

According to August, the current project will be dwarfed by a $60 million plan for North Ambergris Caye, “for which the feasibility study has been completed and the detailed design is nearing completion. This additional investment on the island is expected to be approved within this fiscal year and should commence within a few months thereafter,” he announced.