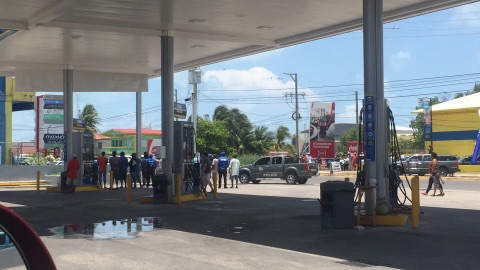 By Aaron Humes: Police responding to Saturday morning’s robbery of the A&R store on the Philip Goldson Highway kept their cool and brought in the robbery suspects – two teenagers who engaged in a fierce gun battle with the law – applying the training techniques taught to them to handle such situations.

Assistant Superintendent in charge of criminal investigation, Alejandro Cowo, noted during Tuesday’s briefing in Belmopan that “[T]he police have been trained several times in dealing with these incidents, and recently there was a special training for some of the special units here at the academy, where they would teach how to clear buildings and how to deal with this situation here and that is what they used exactly on Saturday.”

On Tuesday, 19-year-old Haldwin Castillo and a 17-year-old minor were jointly arraigned for robbery, two counts aggravated assault against responding police officers and damage to property for shooting out the glass front door. Castillo is separately charged with several gun-related offenses – possession of a firearm with a serial number removed, one count of possession of a firearm without a gun license and one count of possession of ammunition.  They both pleaded not guilty and were denied bail due to the nature of the offense committed.  They have been remanded into custody until July.

The accused, police say, had taken the store security guard hostage before relieving the cashier of cash and a cell phone. But they met a responding police team coming out and tried to shoot their way out.

Fortunately, no one was injured during the shootout.