Prison escapees to serve another year in jail 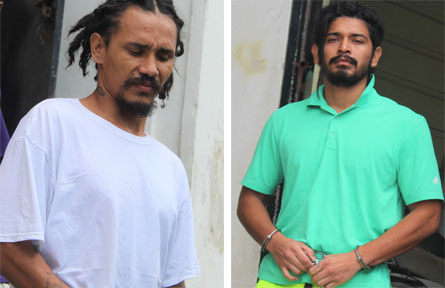 By Aaron Humes: Convicts Rafael Mencias, 31, of Cotton Tree, Cayo District, and Wilser Echevarria, 23, originally from Corozal Town but most recently a resident of Belmopan, will serve an additional year in prison concurrent with their current sentences.

The men escaped briefly from the confines of the Central Prison at Hattieville in May but were quickly recaptured.

Appearing before Senior Magistrate Tricia Pitts-Anderson, Mencias said he was attending school and was asked in March to see a psychiatrist for an evaluation. Instead, he met a man named Rhaburn who gave him an injection without his consent, while he was in handcuffs.

Mencias reported feeling poorly from the effects of the injection. He said that in his view he did not feel “crazy” or exhibit any mental health, so he chose to flee prison.

According to Echevarria, he took his chance while in that area of the prison which had no visual boundary separating it from the countryside. He added that he was also reacting to gunshots from prison security.

Mencias was convicted of the manslaughter death of Philip Moses Hall in Carolina, Corozal District, 2010, and served ten years, including five on remand. But as of when he escaped he was on remand for the murder of Hilton Wade in Cotton Tree in 2018.

Ironically, it came out at both men’s trials that the reason for the killings was due to alleged homosexual advances made on them by their victims.

On May 7th, Echeverria and Mencias were stocking cement blocks in the industrial zone of the prison, when they and another prisoner, Christian Neal, made a daring escape.

Neal, the other inmate who is still on the run, was serving time for 2 counts of robbery and 1 count of unlawful carnal knowledge.