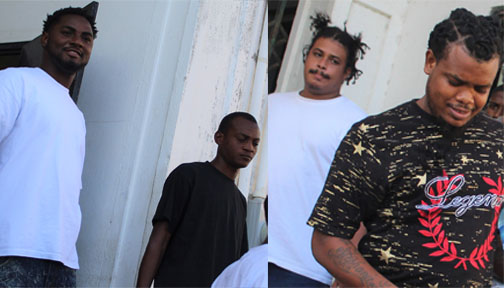 By Aaron Humes: Four familiar names were taken on Friday before the Magistrate’s Court. Police allege that they are members or associates of the infamous George Street Gang, allegedly led by Brandon ‘BT’ Tillett.

Recently, police have been on a crackdown on gang membership, with five men being brought before the courts on that charge in recent weeks.

Shane Harris and Henry Cornejo are accused of being direct members of George Street, while Jovan Clare and James Palacio, both lawfully employed, are nonetheless accused of being members of a particular clique within the larger gang, known as “The Afghanistan Clique.”

Represented by attorney Leeroy Banner, the men all pleaded not guilty.

Banner set about challenging the evidence before the court, submitting that the facts presented do not show evidence to substantiate the charge and the element of proving it are not before the court at this time.

Senior Magistrate Tricia Pitts Anderson will rule next Wednesday, June 12. All four will spend the next few days on remand at the Central Prison.