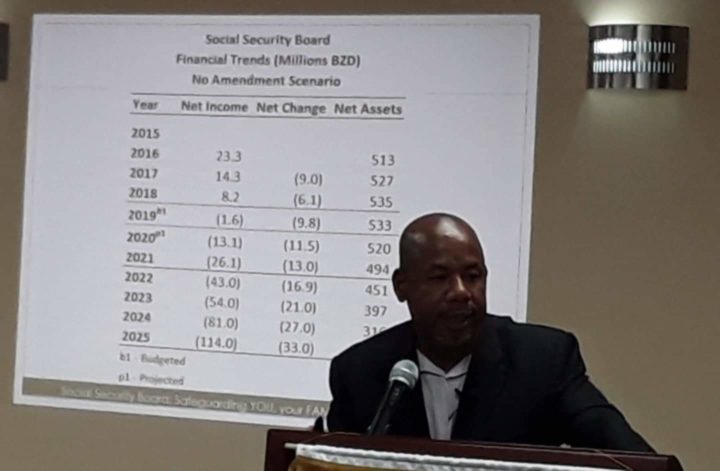 By Aaron Humes: The Social Security Board (SSB) says that due to financial issues, it has little choice but to raise contributions to the scheme from employers and employees. Corresponding improvements in benefits are expected as part of a long overdue overhaul of the social security fund established 38 years ago.

Beginning on July 1, 2019, and continuing into 2021, the taxable rate of income will rise in installments from eight to ten percent and the wage ceiling will rise from $320 to $520 per week. While there will be minimal increases in employer and employee payments in the lower income brackets, three new income brackets will take the brunt of the increase. These increases though will come with a 61% corresponding increase in payments for pensions and shorter-term benefits (employment injury, sickness, pregnancy, etc.).

At an open forum in Belize City, SSB’s CEO Dr. Colin Young explained that the SSB would have had to subsidize payments from its cash reserves to the tune of $1.6 million this year and that this would steadily increase through to 2025 if the SSB could not get more contributions. SSB, he said, was “too big” for that to happen.

Dr. Young made note that there is much more work to do in terms of educating the public about the benefits of Social Security and how to access it. Too many think of it as a “tax” and question its necessity, but while it was set up and run by the Government, what you (and your employer) put in is what you get out.

According to Dr. Young, the phased proposal was approved by both the Chamber of Commerce and the trade unions; the former rejected an immediate increase for business reasons. Payroll masters are being trained to work with the new figures and legislation will be signed before July 1st to make the changes effective.

Dr. Young warned, however, that because of the transition, existing pensioners should not be expecting bigger cheques; they already benefit from a five percent cost of living adjustment given in the past few years. It is trickier for self-employed and what we described to him as “ketch-and-kill” or underemployed individuals, but he maintained that a minimum of eight hours worked weekly sets you up for Social Security payments.

A series of employers’ forums to discuss the changes begin in Belize City at the Princess Ramada on Thursday, June 13.