Over 5 percent GDP growth recorded for first quarter of 2019 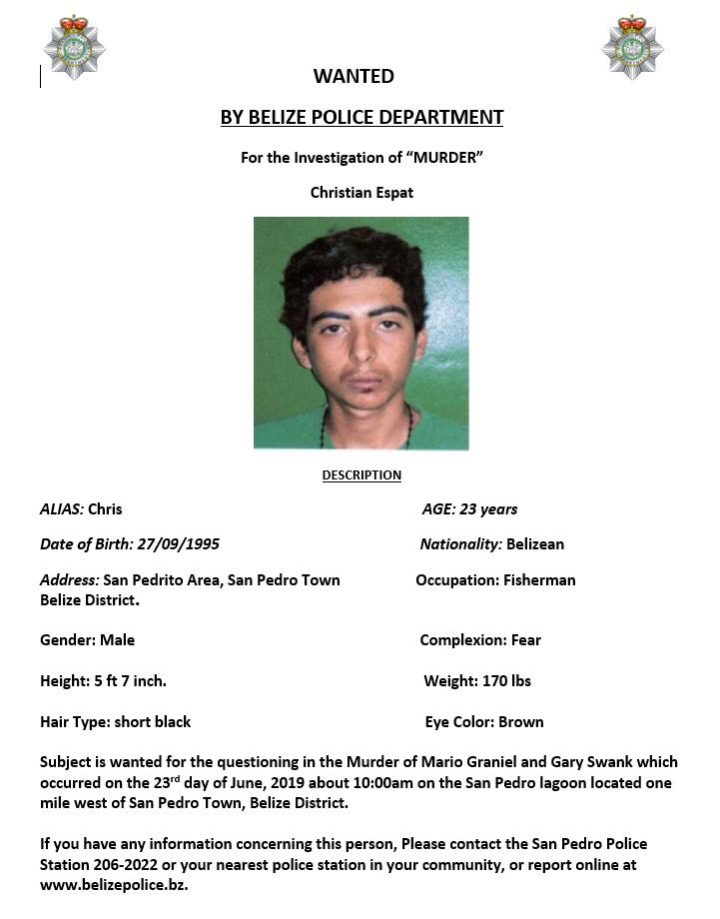 By Aaron Humes: Police have now confirmed that they seek 23-year-old Christian Espat for questioning in relation to the double murder of tour guide Mario Graniel and tourist Dr. Gary Paul Swank that happened on Sunday morning off the coast of Ambergris Caye.

Espat has a long criminal rap sheet, starting with his recent acquittal on murder charges in the death of American retiree Cliff Kirk on July 5, 2018.

According to the San Pedro Sun, Kirk was reportedly shot in the head when four robbers stormed into his property located off the north-west coast of Ambergris Caye. He was first transported to Belize City for medical attention and then taken to the United States of America, where he succumbed to his injury. A few days later, Espat along with Nigel Williams and a minor were arrested and charged.

But at preliminary inquiries, Magistrate Deborah Rogers was convinced by defense attorney Richard “Dickie” Bradley that his clients were wrongfully and improperly accused.

Neither property caretaker Victor Medina nor Kirk’s wife Linda could properly identify if the accused were the ones who visited the property three times that day and who held them up. There was no identification parade and in any event, the perpetrators were masked, so the identification by picture of the accused by Medina was invalid.

Second, there was nothing in the bundle of documents by the prosecution to certify Kirk’s death, meaning the accused cannot be held liable for something that has not been officially confirmed. Espat briefly stated to the Sun after the verdict that he is innocent and that he was wrongly accused in the first place. His family believes that due to Espat’s brushes with the law, he was an easy target to pick.

Espat in August of 2017 was charged for a shooting in the San Pedrito area, Ambergris Caye which injured 27-year-old Lyndon Tyndall, and two primary school students, ages 9 and 12 when they were at a woodwork shop.

He has also been previously charged for drugs and firearm offenses.

Espat is of fair skin, short black hair stands five feet seven inches, and has brown eyes. If you have seen him or know his whereabouts, kindly contact the San Pedro Town [Police Station at 226-2022; the nearest police station in your area; or the Department website at www.belizepolice.bz.