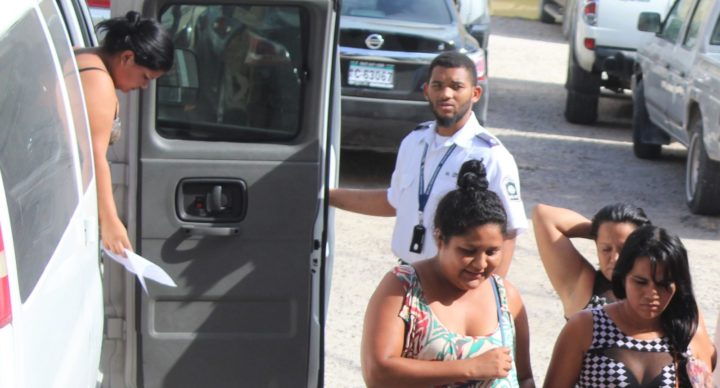 By Aaron Humes: Four women found working with improper or no documentation at the Lion King Bar at the corner of King Street and Amara Avenue in Belize City, are imprisoned until they can pay fines for immigration-related offenses.

Three of the women were charged with failure to comply with the conditions of their visitors’ permit while the fourth woman was charged with the offense of failure to produce documents when demanded by an Immigration Officer.

Appearing before Magistrate Emmerson Banner on Thursday were Honduran 26 year old Xiomara Pinto Correa, who failed to extend her one month stay which expired just days ago; 35-year-old Irma Isabel Arita Portillo, whose time was up from June 10; and, Salvadoran national 26-year-old Sandra Yaneth Chacon, who got a one-year visitor’s permit last May but no extension beyond April 7.

The fourth immigrant, identified as 30-year-old Honduran national Maryuri Yanira Mendoza, was read a single charge of failure to produce documents on demand to an Immigration Officer- she did not have any permit to stay in Belize.

All four women pleaded guilty and were fined $1,000 each due forthwith, which as of this writing they were unable to pay. In default, they will serve six months’ imprisonment and thereafter be removed to their home countries.