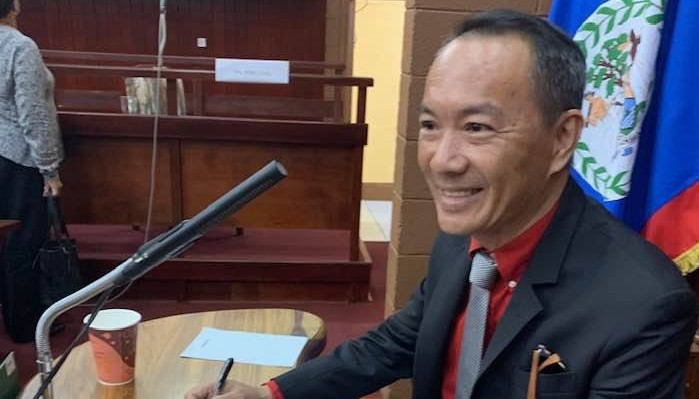 By Aaron Humes: Former president of the Senate, Lee Mark Chang, is for the second time a standard bearer for the United Democratic Party (UDP) after defeating former City Councilor Leila Peyrefitte.

After expressing his thanks to his family and campaigners, a humble Chang attributed his come-from-behind victory to “hard work, focus, positivity and determination.”

Chang always maintained, he said, that the people of Caribbean Shores would ultimately decide, despite the party executive’s support for Peyrefitte, and they rewarded him with the chance to once again become the first Chinese-Belizean to enter the House of Representatives, having done so as President of the Senate.

The businessman was defeated in 2012 by Francis Fonseca in the Freetown division, and had to step aside in 2015 for Dr. Carla Barnett, but he continues to maintain an interest there, he said, as a supporter of new standard bearer Orson Elrington. The divisions sit mostly side by side and what benefits one, benefits the other.

Chang declined to pick a side between his two “friends,” Patrick Faber and John Saldivar, in their race to become leader of the U.D.P.; that was a decision for another day.

Chang’s next task is to apply his dedication to unseating People’s United Party area rep Kareem Musa in the general election.