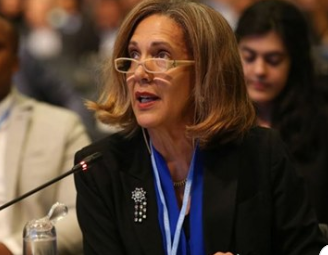 By BBN Staff: Ambassador Louis Young, Chair of the Alliance of Small Island States (AOSIS), has called out oil-producing nations for refusing to acknowledge an important scientific document which stresses that global carbon emissions must be lowered by 2030.

Young, speaking at the Bonn Climate Change Conference (SB50) hosted by the United Nations Framework Convention on Climate Change (UNFCCC) last week, said several oil-producing countries (Saudi Arabia, US, Australia and Iran) are trying to pretend that the report does not exist, which can cause major problems for the AOSIS states.

“The countries that are trying to downplay the importance of the document, erase it from the records, not all of them are showing their faces,” Young said. “It’s unreal, it’s as though they’re resigning our Aosis states to collateral damage, I mean, it’s like we have no importance doesn’t matter.”

The UN Climate Change Report, which was released in October 2018, said that global carbon emissions need to be lowered by 45 percent by the year 2030, in order for the planet to have a fighting chance against the harmful effects of climate change. AOSIS states contribute negligible percentages to the global carbon footprint but are hit first and hardest by the effects of climate change.

Meanwhile, countries like those refusing to acknowledge the report have a vested interest in not lowering their carbon emissions because their wealth is hinged heavily on the sale of oil. The BBC has reported that Saudi Arabia has opposed the report on the grounds that it contains “inconsistencies.”