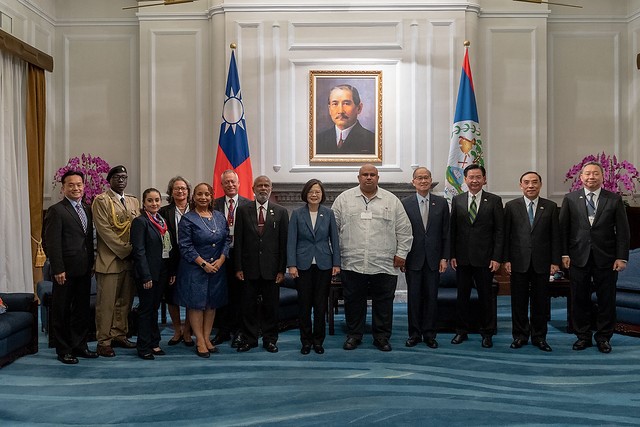 By BBN Staff: Governor-General of Belize, Sir Colville Young is heading a delegation in Taiwan.

The delegation called on President Tsai Ing-wen on Tuesday, July 2, 2019.

While at the Presidential Palace, the Governor-General and President Tsai witnessed the signing of a bilateral agreement by Belize’s Attorney General, Michael Peyrefitte and Taiwan’s Justice Minister, Tsai Ching-Hsiang that would see the two countries cooperate on addressing matters of anti-corruption.

Sir Colville and President Tsai spoke of the strong bonds of friendship and cooperation that has existed in the 30 years of diplomatic relations between the two countries and foresaw an unbreakable connection between Belize and Taiwan for many years to come.

Sir Colville noted the importance of the bilateral agreement on anti-corruption for Belize, and Belize’s desire to learn from Taiwan’s good governance experience and practices.

Accompanying the Governor General and Attorney General are the Financial Secretary, Joseph Waight and the Solicitor General, Elisa Montalvo.

Special visits were made by members of the delegation to some key governmental institutions.

Both the Attorney General and Solicitor General spent time at the Ministry of Justice with the Minister of Justice, Tsai Ching-Hsiang and his team at the Agency Against Corruption familiarizing themselves with their methods and technologies used in fighting and preventing corruption.

Waight held discussions with the Governor of the Central Bank of Taiwan.

During the visit, the delegation visited the Embassy of Belize where they met with some Belizean students studying in Taiwan and engaged in a lively discussion.

Sir Colville in his unique fashion shared a story with the students, conveying the importance of their return home on completion of their studies to contribute to the further development of Belize.