Social worker charged in alleged smuggling ring; boss says he will be dealt with 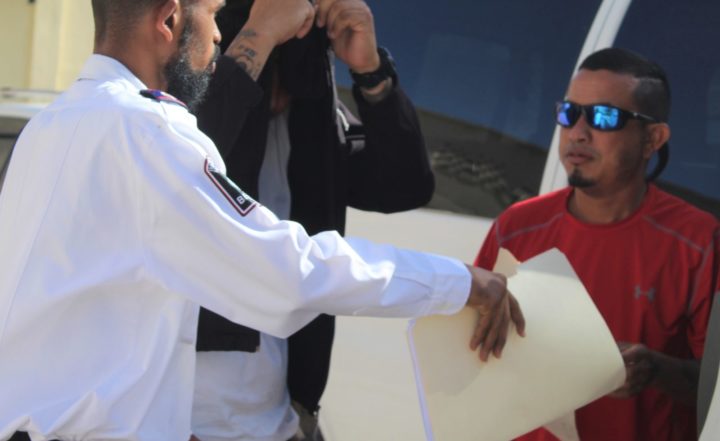 By Aaron Humes: A social worker and senior employee in the Ministry of Human Development and a construction worker turned taxi operator have been charged in what is alleged to be a human smuggling ring.

That crime, police say, is allegedly aiding two minors and two adult men, all originally from Honduras, to pass illegally through Belize for purposes of trafficking in persons, by transporting them in a Ford Escape.

Pleading not guilty, the men were offered bail of $3,000 each with no objection except for conditions to be attached. The court ordered Guerra and Naj to report to Benque’s police station once a week, but did not order their passports confiscated or that they not leave Belize without a court order, as the representative from the Immigration Department had hoped.

The prosecutor said their investigation along with the police’s continues, and other charges may be forthcoming.

It is alleged that Naj accepted an offer from the adult complainants of $500 to drive them and the minors from San Ignacio Town to Orange Walk Town on Tuesday evening and Guerra joined them at the Hattieville bus stop. Police intercepted the vehicle at the entrance to Crooked Tree, Belize District.

The adult Hondurans were brought to court before the arraignment and a Justice of the Peace was located to take their statements. They were then returned to immigration custody, although it is not clear if they will face charges as well.

The news has shocked CEO in the Ministry of Human Development, Judith Alpuche, who says the admittedly small difference between smuggling and trafficking is “technical”, as either “would be a gross and egregious violation of his ethics.”

Considering his position in the department and its mandate to protect the vulnerable, it is considered “absolutely intolerable” for someone of his stature to be involved in such an issue.

Alpuche, who heads the National Anti-Trafficking in Persons Council, said Guerra is being investigated internally and will face disciplinary action from the public service if he is found to be part of a pattern of behavior or enterprise, using the knowledge of his office. “[Guerra] is not one of the human trafficking social workers, for that same reason these things are kept close to the vest and we will look at it. We definitely are very concerned; disappointment does not even begin to describe it. One of my senior managers said it feels like someone died and that’s how it feels, it’s an egregious breach of trust of ethics, of morals and we will have to deal with that head-on.”

The case was adjourned for September 17, 2019, where disclosure is expected to be ready for them in the matter.