Gun and ammo found in Corozal

Olympic Day is back as preparations begin for Tokyo Games 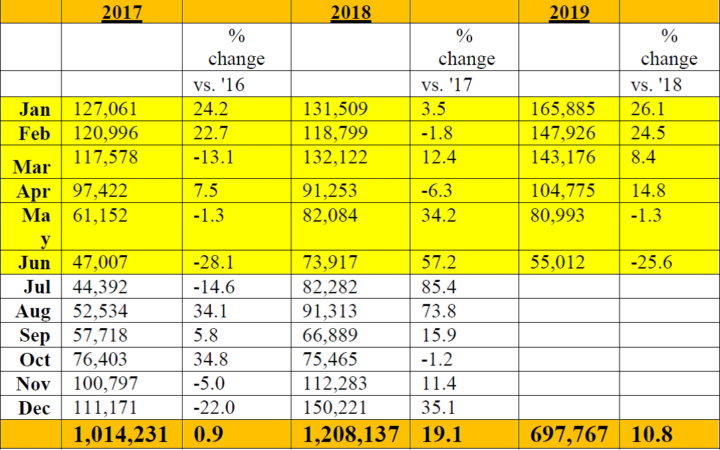 By Aaron Humes: The recent murders and suspicious deaths of tourists in Belize in June appear, for now, to have not slowed down visits to the country, according to the Belize Tourism Board.

There have been just four hundred fewer visitors to Belize compared to last June, and more than 100,000 compared to 2018 in the just-concluded second quarter, despite reports of panicked cancellations after the execution of Gary Swank and Mario Graniel off San Pedro, for which no arrests have been made.

Year over year there is a six percent increase in overnight arrivals, and arrivals rose by more than 5,000 for June over May.

The industry now goes into its “off-season” and the challenge will be to match third quarter 2018’s three straight months of double-digit percentage growth, including more than 21,000 overnight visitors during the September Celebrations.

Cruise ship arrivals have risen nearly 11 percent year over year. However, each month since January has produced fewer arrivals in raw numbers, declining from nearly 166,000 in January to just 55,000 in June. The corresponding months of July, August and September 2018 produced more than 230,000 visitors to Belize City and Harvest Caye in the South.

The BTB says more than 700,000 cruise ship visitors have come to Belize and more than 285,000 overnight arrivals were recorded.

The usual precautions apply but it is now wait and see to discern the long-term impact of June’s death wave on our most important foreign income earner.