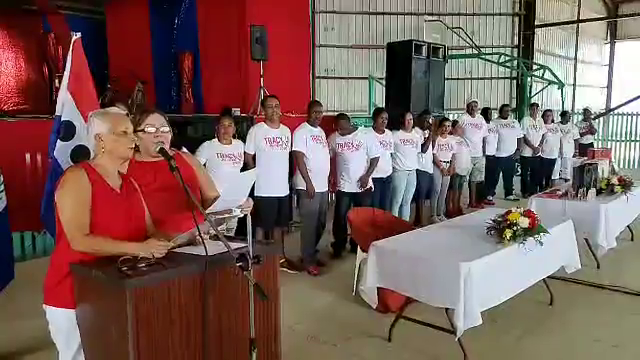 By Aaron Humes: The United Democratic Party has endorsed Minister of State and Albert area representative Tracy Taegar-Panton for a second term in office.

During a family day at Birds’ Isle hosted by the divisional committee, Prime Minister and party leader Dean Barrow said he found it remarkable that in a relatively short time, “she has been able to cement her hold on the Albert constituency; so that I for one am certain that she will continue to be re-elected, and serve until kingdom come, or she chooses to retire – I’m not sure which will happen first.”

Barrow recalled that the daughter of P.U.P. stalwart, the late Dr. Leroy Taegar, came in as a “political novice” with limited activism in the party; but he said she has set an example for the rest of the party’s leaders to follow with how she has looked after her constituency and earned voters’ “love and devotion.” At the same time, he said, she had earned the respect of the business community as Minister of Trade, combining business acumen and a relatable personality.

Accepting the nomination, Taegar-Panton paid humble tribute to her supporters in the Albert Division Action Committee and Albert Care Team, saying she could not go it alone. She also took the opportunity to recognize five major party supporters living in the division.

She recalled the “mixed emotions” of her candidacy launch four years ago, and reiterated her commitment, then as now, to “do the best that I could, for as many as I could, for as long as you would have me.”

She faces the P.U.P.’s, Senator Paul Thompson in the next General Elections.