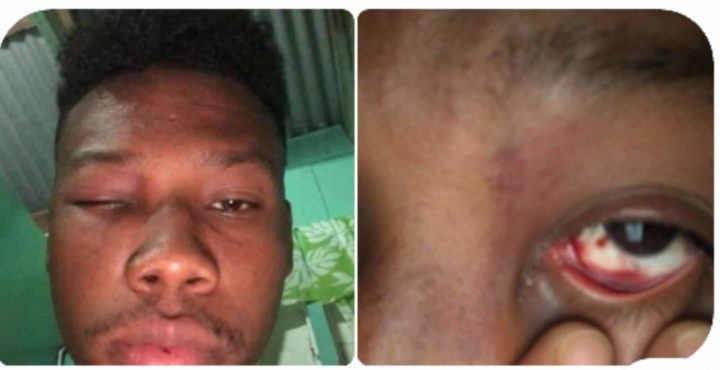 By BBN Staff: Shaquille Rogers, a 24 year old resident of Caye Caulker is claiming that he was abused by a cop on duty in Caye Caulker.

Shortly after 2 o’clock this morning he had just ordered wings on Luciano Reyes Street on the island and was sitting down when the police mobile approached him.

Rogers alleges that one of the cops in the mobile approached him in a hostile manner to conduct a search and in the process the cop hit him on his leg. Rogers accepts that after he was hit by the cop, his response was verbally hostile and as such he was handcuffed and taken to the police station.

In an interview with BBN, Rogers claim that at the station he was hit again by the same officer, and he accepted that at that point he also responded physically and that is when he was handcuffed and put in a cell.

While handcuffed and in the cell, Rogers claims that the same police officer delivered the brunt of the police beating. He claims he bled quite a bit and provided photos of his clothing that showed evidence of the blood stains. The incident also caused him to end up with a swollen right eye.

Caye Caulker police kept Shaquille Rogers detained for the night and this morning he was read 2 charges: one for assaulting a police officer and the other for sexual assault upon a Woman Police Officer (WPC). Rogers admits that he was wrong to react aggressively at the station, but he claims that the sexual assault charge is a trumped up one.

Rogers told BBN that he has secured the services of a lawyer and that they will report the matter formally at the San Pedro police station on Monday.