Foreign Ministers of Belize and Guatemala speak to OAS 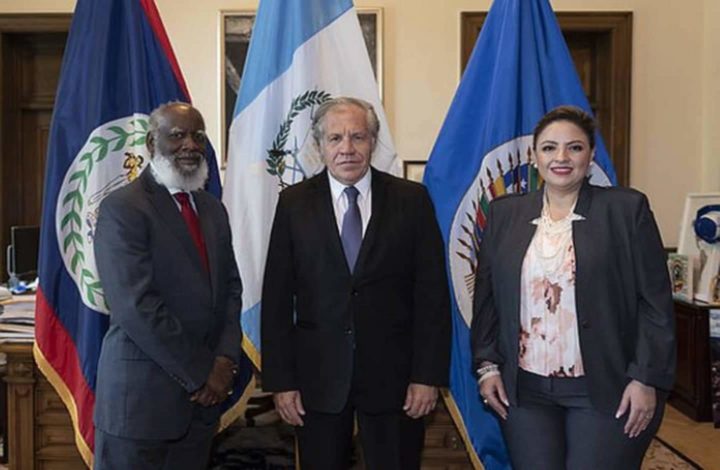 By Aaron Humes:  The Organization of American States (OAS), starting in 2000, began managing the process of dialogue between Belize and Guatemala after decades of fruitless negotiations and rejected potential settlements.

Nearly 11 years after the Special Agreement was signed in Washington, and more than a year after the first of separate referenda on sending the unfounded claim to the International Court of Justice (ICJ), both countries have now agreed to do so.

The foreign ministers of Belize, Wilfred Elrington; and Guatemala, Sandra Jovel, this week spoke to the permanent council of the Organization of American States (OAS) about this process, and received thanks from the Secretary-General of the OAS, Luis Almagro, for their efforts.

The Secretary General commended the advances politically and on the ground through the OAS office in the border area, through which he said, “more than 200 incidents between residents of the zone and the military forces have been verified, and many more have been prevented, effectively fulfilling its work as a neutral, independent and objective interlocutor at the time of the incidents.”

Elrington stated that Belize still needs the OAS offices to keep the peace. “Peace and security is what we seek… we will still need the presence of the OAS office in the Adjacency Zone, which has done a tremendous job to ensure that we have not deteriorated into any kind of a violent conflict between our two countries and that we can maintain peace and good order.”
Jovel expressed her thanks that “my country belongs to a community of states that promotes high values through actions and not just with words…The numerous achievements made under the support of the OAS are not the product of chance, the OAS is an institution that is much more than professionalism and political will.”