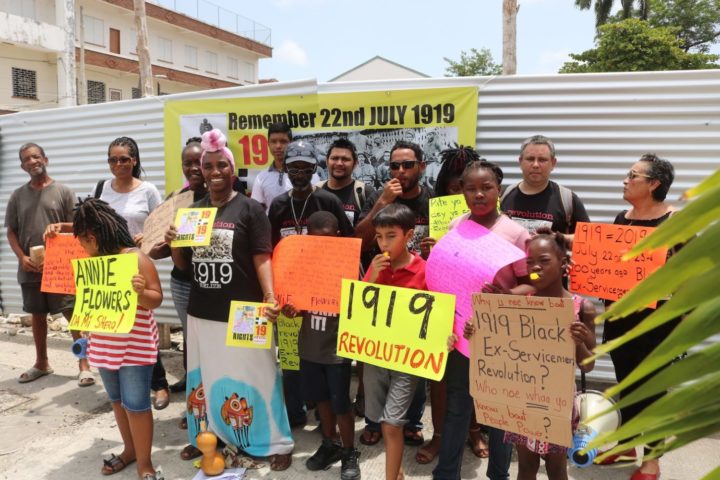 By BBN Staff: Belizeans gathered yesterday to commemorate the 1919 Revolution in Belize.

In July of 1919, several ex-servicemen from British Honduras (now Belize) that served in World War 1 under the British returned home completely disgusted at the racist treatment they suffered by the British Armed Forces.

On their return, their salary was delayed and they gathered in arms to riot in then Belize Town.

The men were soon joined by over 3,000 residents from Belize Town.

The day after the major riot, the British docked a warship and a US gunboat arrived days later.

The event yesterday began at the Battlefield Park with an African libation performed by Sista YaYa Marin Coleman, followed by youths reading all the names of the 340+ Ex-Servicemen from a 1919 Clarion Newspaper account.

The group gathered and retraced the steps of the ex-servicemen on the principal streets of Belize City blowing whistles from Albert Street, to King Street, to Regent Street, across the Haulover Creek (Swing Bridge), and end at the corner of Queen Street and North Front Street, site of the Old Post Office, and in 1919, the Belize Stores.

After retracing the steps of the ex-servicemen, the book “Rights” by Delmer Tzib was launched.

“You can go to school in Belize from you are 5 until you are 55, and you will never know anything about the 1919 riots and what led up to them.” – Evan X Hyde