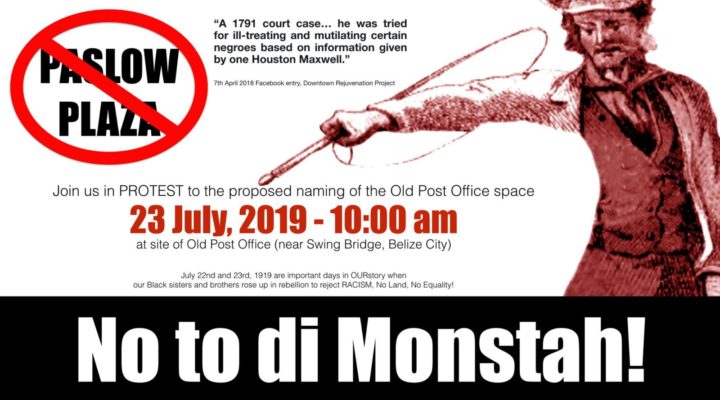 By Aaron Humes: On Tuesday morning, on the second day of commemorations of the 1919 Ex-Servicemen’s Revolt, protestors directed their ire at the future site of ‘Paslow Plaza.’

Named for prominent Bayman Thomas Paslow, it was where the Paslow Building stood until it was gutted by fire in 2002. The new building, commissioned via the Belize City House of Culture and Downtown Rejuvenation Project, will be two stories, concrete, with parking space to the rear, and various office spaces. It will serve as a welcome center for tourists and Belizeans to gather information about the commercial city and Old Capital. It will also be a space for artisans and other organizations.

But former president of the National Institute of Culture and History, Yasser Musa, and activist Yaya Marin-Coleman say it is an undeserved honor for a man found to have violently abused his slaves or ‘property.’

Musa, whose Image Factory is a stone’s throw from the site, described Paslow to reporters as a “mutilator… Cut up, buss up, whap up the enslaved Africans. Dah neva fi he; those people weren’t for him, but the way we were fed this information. They say, “…oh those were his slaves and oh, he fought with them in the battle (of St. George’s Caye).”

Marin-Coleman, speaking with BBN on Tuesday, said that they contacted NICH concerning the name, which is on the billboard advertising construction at the site, and described the response from president Sapna Budhrani as unfavorable, though not going into details.

As part of the teaming up of the Image Factory Art Foundation and UBAD Educational Foundation for a one-year commemoration of the 100th anniversary of the Ex-Servicemen’s Revolt, there will be countrywide market day meetings to hear directly from Belizeans, as well as a petition to be launched shortly.

Marin-Coleman says it is important for Belizeans to hear not only the official history, but history told from the African/Mayan perspective – first introduced at St. John’s College by Musa seven years ago. That also includes women’s histories such as Annie Flowers – a forgotten leader of the 1919 revolt who stood along with Samuel Haynes and other returning servicemen from the First World War. Her story is told in the Anne S. MacPherson book From Colony to Nation: Women Activists and the Gendering of Politics in Belize, 1912-1982.

Of the 1919 revolt, Marin-Coleman mentioned that it featured townspeople as much as ex-servicemen, and was a reaction to poor economic conditions and the mistreatment of the populace by rich merchants, many of whom descended from former slave-masters. It was a continuation of the original slave revolts and other unrest stretching from 1724 into the era of Antonio Soberanis in the 1930’s and the later nationalist movement in the early 1950’s.