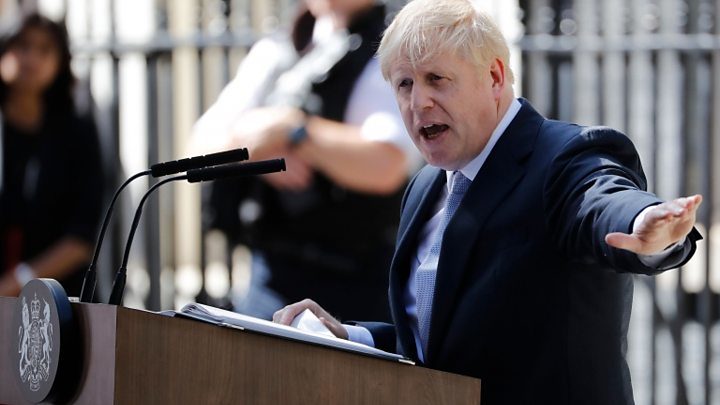 By BBN Staff: Following the resignation of former Prime Minister of the United Kingdom (UK) Theresa May, Boris Johnson has stepped up to become the 14th Prime Minister to serve under the monarch of Queen Elizabeth II.

Johnson, 55, met with the Queen only moments after May tendered her resignation at Buckingham Palace, where she formally asked him to be the new P.M. In his first address, Johnson vowed to make BREXIT, the term used for the UK’s departure from the European Union (EU), a reality in October whether or not the country gets the deal it wants from the EU.

Johnson replaces May after she served three years as PM then resigned after she lost the support of her party, which refused to support any of the decisions she was making regarding Brexit.  Johnson was chosen to be May’s successor at a leadership convention for his party on
Tuesday. He won a total of 92,153 votes, a decisive victory over his opponent Jeremy Hunt, who only had 46,656 votes.

International media such as the Washington Post noted that only Conservative Party members paying their dues were allowed to vote, narrowing the number of UK residents allowed to choose their next Prime Minister from 66 million to 139,000. Following the vote, many people
took to social media to voice their disapproval posting the hashtag “#NotMyPM”. The polling site YouGov conducted a survey and discovered that 58 percent of UK residents polled had a negative view of Johnson.