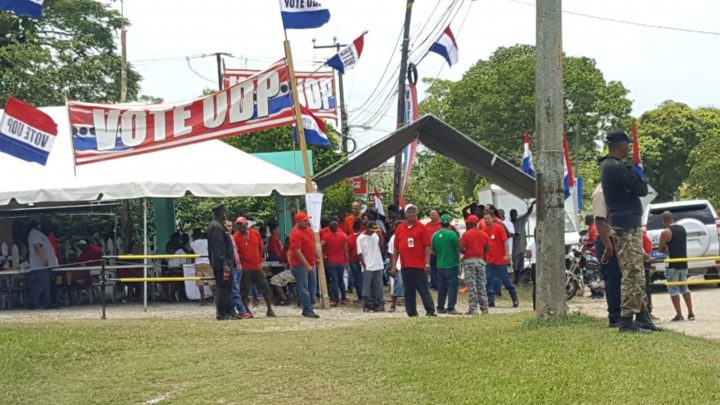 By BBN Staff: Today the United Democratic Party (UDP) emerged victorious in 3 of 5 villages battleground villages in the Cayo District. The villages won by the UDP are Bullet Tree, Santa Familia and Ontario while the PUP took back Georgeville and was uncontested in Seven Miles (El Progresso).

Bullet Tree and Georgeville in particular were battleground villages today, and the energy and hype displayed in both villages was reminiscent of a general election. In fact, both Prime Minister, Dean Barrow, and Opposition Leader, Johnny Briceno visited these crucial villages today as a show of support to their respective village slates.

The PUP was hoping to hold on to Bullet Tree which they had snatched from the UDP three years ago. However, despite PUP standard bearer, Michel Chebat, bringing out party guns such as Cordel Hyde and other senior party officials as part of their election rally held on Friday night, and putting up the incumbent Chairman again, the PUP still lost Bullet Tree. All 7 UDP candidates, including the Chairman, were elected to serve for the next 3 years and Minister Omar Figueroa and his camp are claiming this as a major victory for their party.

In Georgeville, the PUP regained control from the UDP, with all 7 PUP candidates winning by substantial margins. This PUP insiders say is a major defeat for the UDP in Cayo Central, and one that is welcome coming fresh off the heels of the PUP defeating the UDP in San Antonio village last week.

The PUP managed to squeeze in 2 councilors in Santa Familia but the UDP will dominate as they won the Chairman and 4 councilors.

In Ontario, the UDP won all 7 positions.