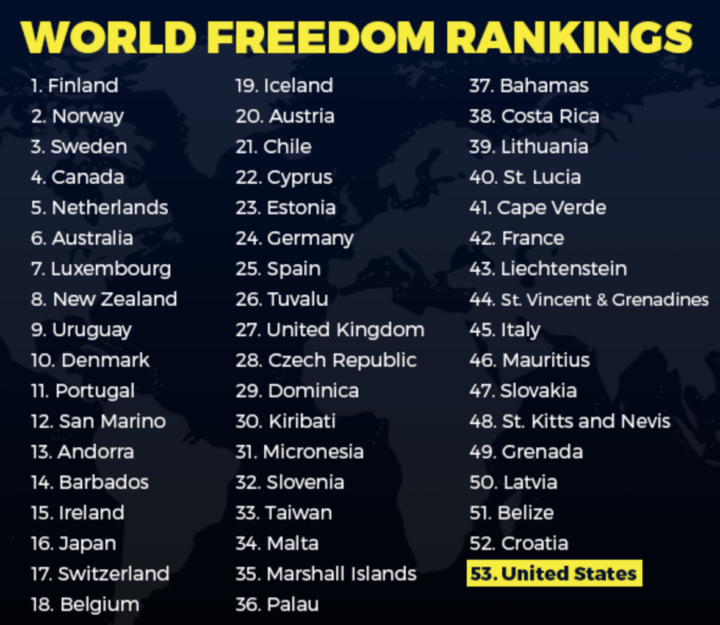 By BBN Staff: Belize has been ranked at 51 for ‘Freedom in the World’ on a list of 210 countries in an annual report compiled by Freedom House, an international non-government organization that advocates for global freedom and civil rights.

The report noted that in 2018, Freedom in the World recorded its 13th consecutive year of global decline, spanning a variety of countries from long-standing democracies like the United States, which Belize actually outranks, to authoritarian regimes like China and Russia.

“The overall losses are still shallow compared with the gains of the late 20th century, but the pattern is consistent and ominous. Democracy is in retreat,” the report said.

Belize is listed as a free nation, receiving an aggregate score of 86 out of 100 but receiving scores of 1.5 out of 7 in the ‘Freedom’ rating; 1 out of 7 in the ‘Political Rights’ rating; and 2 out of 7 for ‘Civil Liberties’ rating, with 1 being most free and 7 being least.

With regard to political liberties, the report cited a lack of inclusion of women in the political process. “Women hold only two seats in the current House of Representatives and three seats in the Senate. There were 11 women candidates out of a total of 88 in the 2015 elections. However, women play a significant role in the political system more generally.

Indigenous people, particularly those of Mayan descent, are not well represented in politics. The LGBT (lesbian, gay, bisexual, and transgender) community faces discrimination, and this affects the ability of LGBT people to engage fully in political and electoral processes. A collection of religious denominations nominate one member of the Senate, but non-Christian groups are not included in the process,” it said.

“Belize continues to struggle with corruption, and there is little political will to address the problem. Anti-corruption laws are poorly enforced; for example, no one has ever been prosecuted under the Prevention of Corruption in Public Life Act, which has been on the books for over 20 years. Among other scandals in recent years, the Lands and Surveys Department of the Ministry of Natural Resources has been accused of illegally distributing land to UDP supporters,” the report also noted.

The report also cited perceived stifling of the media: “The constitution guarantees freedom of the press, though it includes exceptions for interests such as national security, public order, and morality. While reporting generally covers a wide range of viewpoints in practice, journalists sometimes face threats, physical harassment, or assault in the course of their work. In May 2018, a state-owned telecommunications firm reportedly stopped advertising with a media group that had links to the opposition PUP.”

The report also noted ongoing problems facing the country including a judiciary with a terribly low conviction rate, a high murder rate, case of police brutality, and discrimination of the LGBT community.