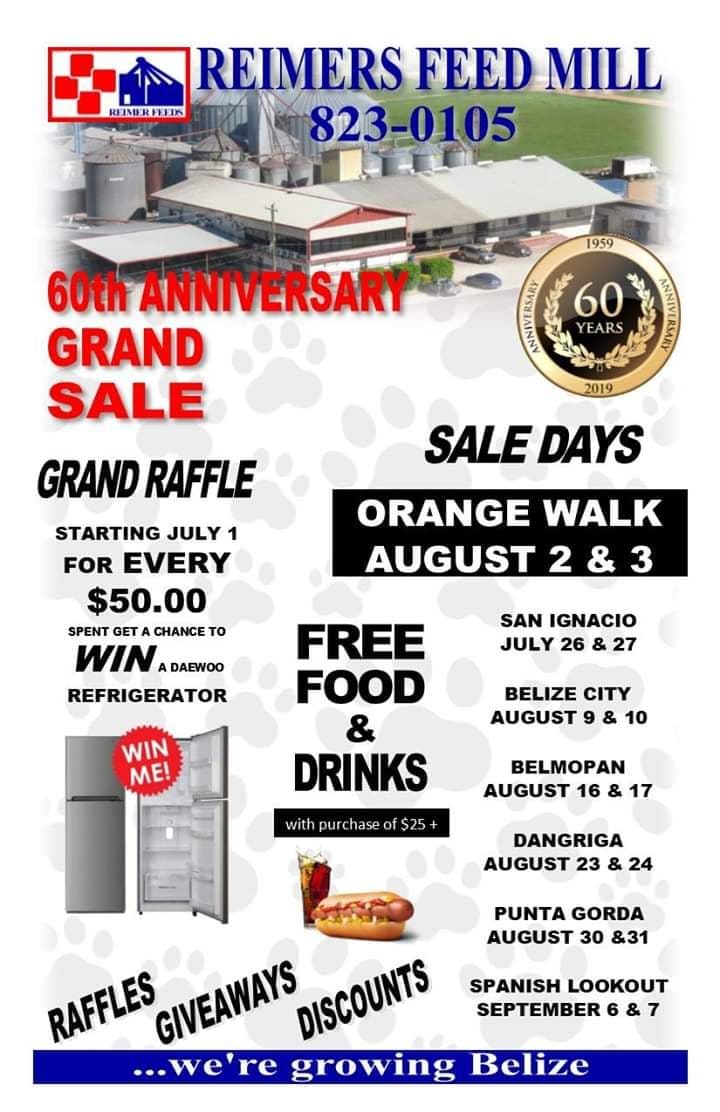 By BBN Staff: In 1959, two brothers that used to work at a feed mill in Mexico opened up their own animal feed business with nothing more than a small plot of land in Spanish Lookout and a shovel. Today, some 60 years later, Reimers Feed Mill has grown to cover the largest feed customer base in Belize, with seven retail stores, countrywide delivery service, and around 90 employees. As a part of the expansion, the company now provides feed for every farm animal but also farm/ranch products and pet supplies.

To mark the momentous occasion, Reimers is celebrating along with its customers by hosting a series of sales and raffles at its branches countrywide. The sales started in San Ignacio end of July and continue on August 2 and 3 in Orange Walk. On August 9 and 10, Belize City
customers join the celebration, followed by Belmopan on August 16 & 17, Dangriga on August 23 & 24, Punta Gorda on August 30 & 31, and Spanish Lookout on September 6 & 7.

For every $50 spent, customers get a chance to win an 11 Cubic Daewoo Refrigerator. The raffles will be drawn at 9:00 a.m. on the Monday following the sale at each branch location. Breaking Belize News (BBN) spoke with Kendale Reimer, executive manager of Reimers Feed Mill, who said he believes the company emphasis on quality has been key in keeping the business growing as much as it has.

“Even looking back at where we were 12 years ago, really is a milestone to see where are. We aim to give quality, so the customers never have to think twice about coming back,” Reimer said.

He also attributed some of the company’s success to the fact that Belizeans are taking pet care more seriously.