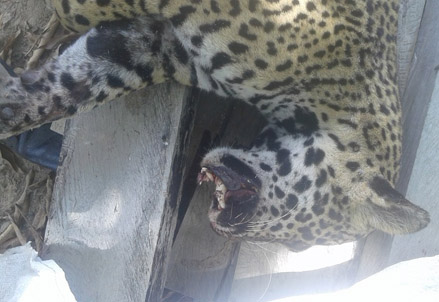 By BBN Staff: The Forestry Department is asking the public for information leading to the apprehension of the person/persons responsible for the brutal killing of a jaguar in the Stann Creek district.

Oscar Ulloa, forester – Savannah Forest Station, told Breaking Belize News (BBN), that the department received a call on the morning of Friday, August 2, informing them about the dead jaguar. They found its body around 10 a.m. near the Georgetown bridge on the highway just between Georgetown and San Roman village. The animal had been shot and its fangs had been ripped out of its mouth.

Ulloa noted that jaguars are protected under the Wildlife Protection Act, Chapter 220 of the Laws of Belize, making it an offense to kill them. Anyone with information on the incident is urged to call the Forestry Department at 533-3014 or 822-1524.

While the fangs or other parts of a jaguar are valuable on the black market, it is notable that every jaguar killed brings the species closer to extinction. An article published earlier this year on the EcoWatch, noted that experts estimates there are around 15,000 jaguars left on earth.

In May, photos of a decapitated jaguar began circulating on social media. It was met with large public condemnation and private sector entities joined together to offer more than $10,000 in reward money for the capture of the perpetrators, but ultimately no one was brought to justice for the incident.

BBN joins with the Forestry Department in condemning the heinous act.