Chamber of Commerce to host HIV in the Workplace Workshop

Belize: Settle Out of Court With Guatemala 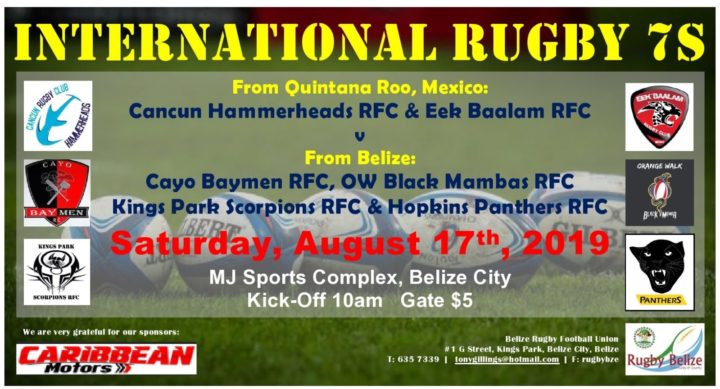 By BBN Staff: The Belize Rugby 7’s league continues to make history with its upcoming friendly match against Mexico and other major developments in the league scheduled to take place this month.

Tony Gillings, the founder of the league Rugby Belize, explained that the game is important for Rugby in Belize because the league is only
four years old which means the players have not had many opportunities to play against experienced players.

“The Cancun Hammerheads are 10 years old and have played all over Mexico. They are formidable, but we are not worried because our teams have been training hard,” Gillings said.

He added that Belize’s teams will be traveling to Mexico next month for another match, where they will have the opportunity to play
against even more teams that have experience.

Gillings also noted that a major development for the sport of Rugby in Belize is coming up on August 21, when he will travel to the United
States to submit an application to have Rugby Belize become apart of Rugby Americas North, the regional body that oversees Rugby in the
same way FIFA oversees football.

He stressed that the being certified by Rugby Americas opens up a world of opportunities for Belizean players such as competing in the
Olympics, Commonwealth Games, and the opportunity to get scholarships to American Universities on Rugby scholarships just like basketball and football athletes.

Gillings founded Rugby Belize in 2015 as a means of giving at-risk youth a meaningful outlet and keep them from crime and violence.

“Rugby is well known as a sport that you can take into tough areas for the youth to allow them to use their aggression in a controlled manner on a sports field. So I thought, why not bring it here?” Gillings explained.