Two Colombians and a Belizean sentenced in U.S. for cocaine smuggling 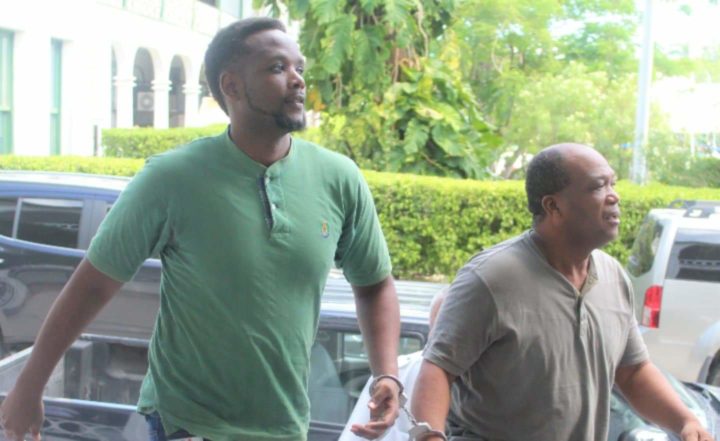 By Aaron Humes: Officers Leonard Nunez and Hallett King will not serve any further prison time after being sentenced by Justice Collin Williams today.

The court ruled that for their manslaughter conviction, in the sudden death of Hilberto Sotz in June of 2015, they would be jailed for nine months; however, between their initial remand in 2015 and 2016 and a further month after being convicted in July, they have already served 1 year 5 months and 9 days. They were released on bail after their charges were downgraded from murder.

The men’s defense called Sotz’s death “involuntary manslaughter.” A jury convicted Nunez and King of causing the death of Sotz by harm, though unintentionally.

Justice Williams said he took into consideration the aggravating and mitigating factors in the cops’ case. Sotz, held in a burglary investigation, he said, should have been protected while detained, but no one directly tied the officers to his death and they have immaculate records in the Police Department and no convictions before this for criminal offenses.

During mitigation in which three witnesses were called, both apologized for Sotz’s death in their care but still denied they had anything to do with it. The judge also noted that no particular weapon was identified as being used in the death of Sotz.

The Crown’s case was built from circumstantial evidence and a detainee who testified he could only say that he heard Sotz crying for help and later he heard what sounded like slaps. Then he saw the two officers, King and Nunez, came out with Sotz carrying him as he was unable to walk. Sotz was being rushed to the Caye Caulker poly clinic on the island where he died from injuries sustained whilst in police custody, which a jury found were inflicted and caused by the police officers whose custody Sotz was in.

Doctor Mario Estradabran’s post-mortem examination concluded that Sotz died from vascular shock, trauma to the head which caused blood clot which led to a heart attack. He said that the head injury had to have been inflicted two hours prior to death, either from a hit to the head with a blunt object, or a fall. Observations of burns on the youth’s upper chest led prosecutors to suggest he was tortured, but no evidence was brought before the court to suggest that such an act could have been done by the officers.