Lady Jaguars called up to roar 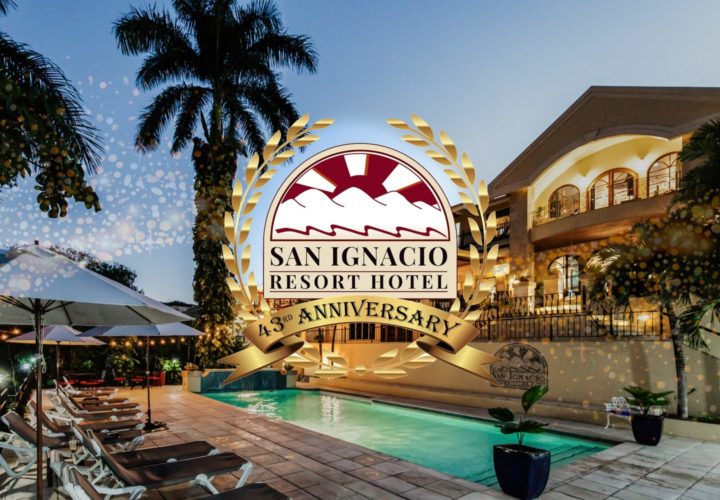 By BBN Staff: San Ignacio Resort Hotel, a premier hotel located on Buena Vista street and perched on the hills overseeing the scenic Macal River, today celebrates 43 years of being in business. To celebrate its 43 years of existence, the San Ignacio Resort Hotel is having a BBQ anniversary celebration on Friday, August 16th 2019. There will be grilled specials from Chef Enrique Awe & his team and giveaways you won’t want to miss!

Despite the world class nature of the current hotel, the San Ignacio Resort Hotel has its foundation in humble beginnings. In 1973, when banking institutions offered loans to those who wished to embark on business ventures in the tourism industry, Escander Bedran Sr. borrowed and built the San Ignacio Resort Hotel and on August 14th 1976 the hotel first opened its doors.

Of significance is that Bedran’s dream hotel was built at a time when there was little or no tourism in San Ignacio. In the 1970’s San Ignacio town was simply an overnight stop on the way to Tikal and as such the early days for San Ignacio Resort Hotel was not easy. However, in 1975, the same Escandar Bedran Sr. built the Old Succotz Ferry, which facilitated access to the Xunantunich maya temple. Escander Bedran’s dream was to bring more tourism directly to San Ignacio Town itself, as most of the resorts and hotels were found in the more secluded areas outside the town. To highlight his words, as written in the Belize Investment magazine of Sept. 1976, at the opening ceremonies, “San Ignacio Hotel…above all…a place for the people of San Ignacio…a spot where local residents could come to relax and have fun at a reasonable price.”

In February of 1994, San Ignacio Resort Hotel had the honor of hosting Her Majesty Queen Elizabeth II during her stay in Belize. Their staff trained for 6 months in preparation for her stay and the protocols established by Bedran’s daughter, Mariam paved the way for future business with parties such as the Ministry of Foreign Affairs and the US Peace Corps.

In 1996 Escandar Bedran Sr. retired and over the years his daughters Mariam, Terry, Paulita and Nazli took over the management of the business. During the early 2000, they dreamed of continuing their father’s legacy and expanding their business. They launched a new slogan in 2005 ‘A New Era of Luxury’ and began a movement that marked a transition and expansion towards becoming a more luxury oriented business. Though the original 7 rooms built by their father remain, they revamped the other rooms and now have a total of 26 rooms that match the standards of their luxury brand. Their passion and hard work paid off when San Ignacio Resort Hotel were recognized as the Hotel of the Year in 2012 and 2016, the Hospitality Award in 2015 and the Restaurant of the Year in 2016, by the Belize Tourism Board.

San Ignacio Resort Hotel’s accommodations offer a variety of perks and views depending on which you choose. The Garden Rooms offer a relaxing escape from the outside world despite being mere minutes away. A lazy sway in the hammock as you watch the birds and butterflies flit by sounds like the perfect way to past the time. If you’re lucky, you might even get the Garden Room that still contains tiles made by Escandar Bedran Sr. himself! If you really want the jungle experience then the River View room is perfect for you. Feel the world melt away as you relax in your chair on the balcony overlooking the Macal River. San Ignacio Town feels more than just 10 minutes away. For more information about their accommodations, visit their Facebook page or the San Ignacio Resort Hotel website.