Vietnam Ambassador to Belize gets straight to work; Meets with several GOB officials 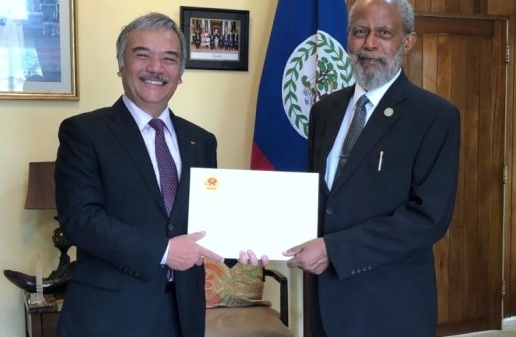 By BBN Staff: Following the presentation of his credentials to the Governor-General Sir Colville Young on Monday, Vietnamese Ambassador to Mexico and Belize H.E. Nguyen Hoai Duong got straight to work meeting with several key members of the Government of Belize.

During his meeting with the Governor-General, Duong conveyed greeting from Party General Secretary and President Nguyen Phu Trong, he also expressed Trong’s wishes for greater friendship and cooperation between the two Governments in a more sustainable and practical manner in the time ahead. Duong also accepted the Governor Generals complement on his country’s socio-economic successes over the years.

Duong also met with Prime Minister Dean Barrow, where they spoke briefly on matters of poverty alleviation and social welfare with the Prime Minister expressing his hope that both nations will further promote cooperation in the fields of economy, trade, and investment within the framework of the bilateral and multilateral mechanisms.

Duong also met with Foreign Minister Wilfred Elrington, an extended an invitation to him to journey to Vietnam and to discuss measures to strengthen the friendship and all-round cooperation between the two countries.

Belize and Vietnam have had diplomatic relations since 1995, however, there is not an embassy established in Belize so the Ambassador to Mexico handles relations for both Belize and Mexico.