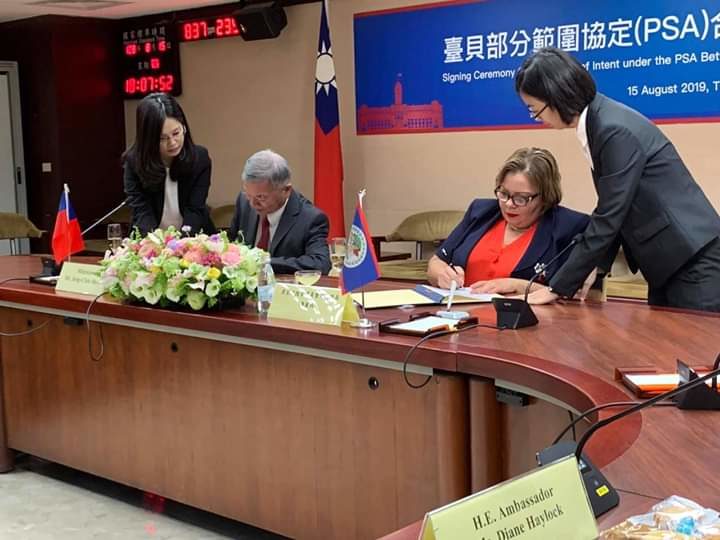 By BBN Staff: Today, the Government of Belize (GOB) and the Government of the Republic of China (Taiwan) (RoC) signed a Letter of Intent (LOI) to engage in the negotiation of a Partial Scope Agreement (PSA) geared towards formalizing trade relations between the two countries.

Minister of State with responsibility for Investment, Tracy Panton, signed the LOI in Taipei, Taiwan, while Jong-Chin Shen, Minister of Economic Affairs, signed on behalf of Taiwan. The agreement came at the end of a week-long visit of a delegation from the Ministry of Investment, Trade and Commerce.

“The LOI clearly lays out the nature of the agreement as being only partial in its scope of product coverage and should conform to the rules of trade under the auspices of the World Trade Organization (WTO). It also recognizes Belize’s obligations to the CARICOM-CSME under the Revised Treaty of Chaguaramas including the CSME,” GOB said in a statement issued earlier.

The PSA contains a commitment that both parties should receive “acceptable benefits,” through the promotion of economic development through investment and trade. The agreement also says that there should be a targeted agenda for cooperation to be pursued by the RoC to strengthen Belize’s capacity in key areas of product development, food safety and standards. GOB noted that the LOI is not intended to create any legally binding rights and obligations on the parties.