The importance of barrier islands to Belize 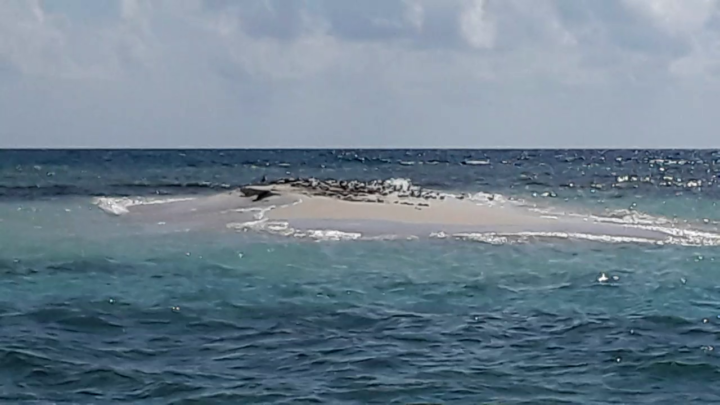 By Aaron Humes: As part of our recent training trip with the Earth Journalism Network, Breaking Belize News had the opportunity to observe for ourselves the effects of climate change and other activity on the management of neighbor islands Sergeant’s and Goff’s Cayes, which along with English Caye oversee the main channel for cruise visitors to come to Belize, and help protect the coastline from the devastating effect of storm surge from hurricanes.

The islands sit directly on or near the Barrier Reef, but each has seen its toll. Sergeant’s Caye these days is barely big enough to host a few sea birds, its area steadily washed away by the rising sea. But it was once part of the first line of defense in tropical storms and hurricanes, absorbing the crashing waves and preventing them from impacting the coast between Corozal Town and Punta Gorda.

According to Executive Director of the Turneffe Atoll Sustainability Association Valdemar Andrade, “There is a natural way the barrier islands react towards the waves and the winds. Generally, they are rolling over themselves right. So I was using it as an example of how areas react that is behind mangroves or are covered with mangroves. If you noticed, Sergeant’s Caye did not have any protection and so that probably one of the reasons why it was in the state that it was.”

The chances of Sergeant’s Caye, which we are told once hosted British soldiers based in Belize, returning to anything like its former glory are minimal, depending on an unlikely fall in sea levels.

But at nearby Goff’s Caye, which measures around 1.2 to 1.5 acres, the Government, through the Coastal Zone Management Authority and Institute, has put in place effective management policies for many years.

There is a height requirement tied to fees for usage, and a flat fee of $3,000 for groups renting the island for parties and celebrations. It is a favorite of cruise ship passengers, who are allowed by groups of eight to disembark for the day with tour guides.

The park rangers, Ian Banks and Jason Ferguson, strictly enforce prohibitions against swimming in any area other than the small beach immediately west of the pier, to not affect the surrounding corals. The caye has a toilet with limited water use and at most, two hundred to two hundred and fifty people are allowed on at one time.

Andrade, former cruise director with the Belize Tourism Board, encourages limits of acceptable change guide management of these spectacular areas. “…you have to be monitoring water quality, the reef health, fish population. For example, they said that they get three hundred people per day. They turn them in the water one hundred at a time. So perhaps they have a management regime that says that’s the acceptable amount of people that they would want to put in the water at any one time. They had areas where you could swim and areas where you cannot swim.”

But according to Ranger Ferguson, “Out here you face a lot of challenges with visitors because they come here and they feel like this is just an island where you can come and have fun and then they do not want to pay. We have things that we have to take care of. We have to clean the island. We have to make sure [we’re] ready for anybody else. But most people just feel like you just come and enjoy and go. You got people who want to do their own thing. So we have to be out here to make them know what they can and cannot do.”

Ferguson further notes that due to the sea tides, the island actually adds area later in the year, then loses it earlier on. “…But what happens now, it is filling up back but it is not coming back to the correct size where it is usually at. Too much people come and touch whatever. People use it and they don’t take care of it. When they think about taking care of it, it is too late. They have to start from early, fix what we could fix. Maybe by the next ten years, you might find ruins because the island will wash away. You won’t have the island again.”

The Swallow Caye Sanctuary, a haven for manatees, was established by the late Lionel “Chocolate” Heredia, a San Pedrano who made it his personal base for many years and led the fight to conserve it. It is one of many protected areas along Belize’s shoreline.

We’ll continue to have further stories on the environmental challenges facing Belize and the efforts being made to solve them.