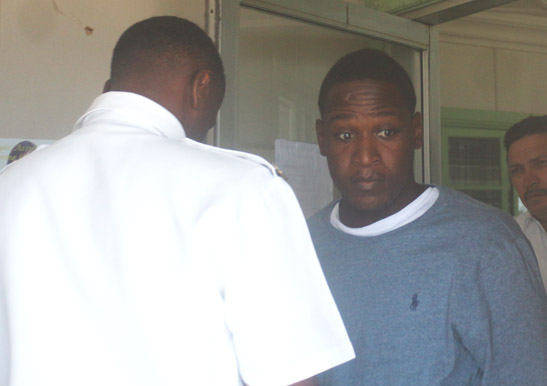 By Aaron Humes: Twenty-two-year-old Kafele Garcia, an American national charged with the murder of 25-year-old Ervin Franklin, was offered a bail of $50,000 with one surety or 2 sureties of $25,000 each on Friday by Justice Herbert Lord.

Garcia is not to be seen on the street between the hours of 8:30 p.m. and 6:00 a.m. Another condition is that he must surrender all of his travel documents to the court and he is not to leave the jurisdiction of the court without the permission of a judge of the Supreme Court. Also he is not to interfere with any of the prosecution’s witness or witnesses.

The incident occurred about 2:30 a.m. on October 14, 2015, on Edwin Parks Street in Lord’s Bank. According to an eye witness, Franklin was cursing at a woman and assaulting her while she and another man were walking on Edwin Parks Street when Garcia intervened and a struggle ensued between him and Franklin. During the struggle Garcia is alleged to have thrown punches at Franklin several times and Franklin fell to the ground and blood was seen coming from his body.

Garcia was represented by attorney Anthony Sylvestre, who in his application for bail, said that Garcia has been on remand for about 4 years and the trial will be held in the near future. The Crown was represented by Crown Counsel Sherigne Rodriguez.