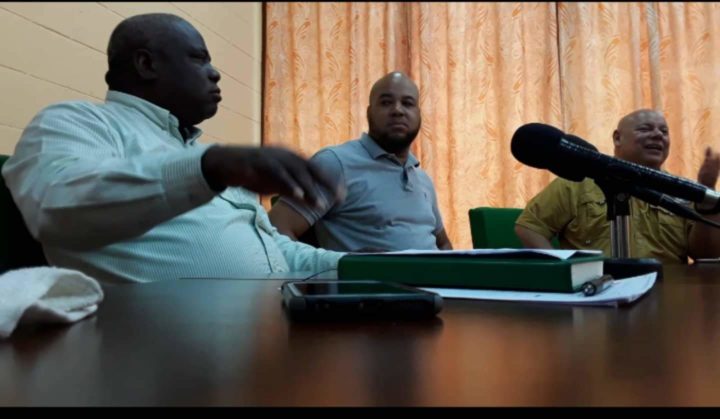 By Aaron Humes: Soon – likely before the end of the year – you can see the goings-on inside the National Assembly in a whole new way.

After a meeting Tuesday in Belmopan, plans are apace to greatly expand and improve coverage of meetings of the House of Representatives and Senate, in a joint effort between the National Assembly staff, leading media houses and the Government Press Office.

Meetings will be carried live as an option for all media houses and stories will be distributed faster.

A five-member committee headed by Clerk to the National Assembly Eddie Webster was established to shepherd the changes. Other members of the Committee include Government Press Office Director Dorian Pakeman; Carlos Waight of The National Channel, which currently carries meetings live; News Director for Channel 7 News Jules Vasquez; and Louis Wade of hometown station PLUS TV.
The Press Office will be responsible for maintaining and establishing the central feed to media houses using upgraded cameras and technology that will allow for live streaming and immediate editing capability.

The National Assembly has assigned a budget of some $65,000 for the project, 40 thousand of which is to be donated in early September by the Government of Taiwan, and the rest coming from outstanding funds by the Forum of Presiding Officers of Parliaments of Central America and the Caribbean Basin (FOPREL), a subset of the Central American Integration System (SICA).

Likewise, there was further discussion on bettering the working environment for the media inside the National Assembly, including greater access to Wi-Fi and better seating.

It is all, the Clerk said, in the greater interest of the public, improving the visual aspect of coverage.
Meanwhile, Pakeman promised no “sanitizing” of the feed, pointing out that the GPO’s resources are also available to the media promoted by the Loyal Opposition.