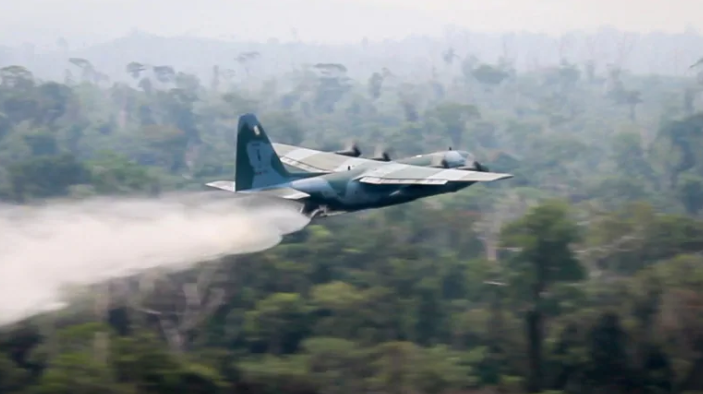 By BBN Staff: President of Brazil, Jair Bolsonaro, has deployed over 40,000 military personnel to assist with fighting the ongoing fires in the amazon rain forest, following major international backlash and threats of economic sanctions.

Earlier today, the Brazilian military released a video of a warplane dropping water on an area in the forest, which currently has over 2,500 active fires. Defence Minister Fernando Azevedo said that a total of 44,000 troops have been deployed to Brazilian states Roraima, Rondonia, Tocantins, Para, Acre, and Mato Grosso, with requests already being made for additional support.

While forest fires in the amazon are nothing new, the Brazilian space agency INPE has registered 72,843 fires this year, the highest number since records began in 2013. More than 9,500 have been spotted by satellites over the past week. Locally and internationally, Bolsonaro has been accused of being a part of the problem, having repeatedly said that the amazon needs to be open to business interest such as mining, agriculture, and logging.

With Brazil’s perceived lack of will to save the forest, France and Ireland threatened to oppose an EU trade deal struck in June with a regional South American bloc. France and Ireland have said they will not ratify a large trade deal with South American nations and Finland’s finance minister has called on the EU to consider banning Brazilian beef imports. Other countries have also considered targeting Brazil’s economy to encourage more action.

Meanwhile, people have gathered outside Brazilian embassies from Mexico City and Lima to London and Paris as images of the raging fires are shared throughout the world.

Known as the “lungs of the world”, the Amazon is the largest rain forest in the world and is a vital carbon store that slows down the pace of global warming. The area is also home to about three million species of plants and animals, and one million indigenous people. The seriousness of the situation has even invoked a response from the Vatican City, with Pope Francis calling for urgent action to be taken, alongside prayers.