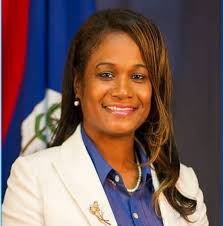 By Aaron Humes: Belize City Councilor Dr. Candice Pitts will not be appointed a Senator for the Opposition People’s United Party.

Her name had been floated as a candidate a few weeks ago to succeed Valerie Woods, who ran into difficulties with her party concerning her vote earlier this year on the Guatemala dispute referendum, where she abstained.

Dr. Pitts, reports in other media indicated, would have had to resign her seat on the Council under Section 7 – 1 (J) of the Belize City Council Act, which says quote, “No person shall be eligible for election as a member of the Council, or having been elected, shall sit or vote on the Council, who:- is or becomes a member of the National Assembly or of any commission established by or under the Belize Constitution.”

A few notable politicians have had to step aside under this rule include former Mayor and area representative Jose Coye in 1998 and current Prime Minister Dean Barrow, who stepped down in 1983 to run for the Queen’s Square seat he still holds.

Dr. Pitts has been endorsed as PUP standard bearer for Mesopotamia division after being excluded from running in Port Loyola, so she still has a shot at entering the National Assembly.